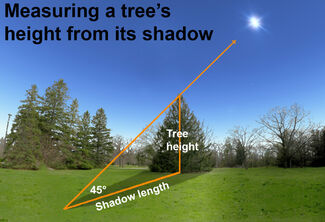 Sharp-eyed observers may have noticed that, since the first day of winter more than a month ago, the sun has climbed higher in our midday sky.

Of course, the sun will continue its daily climb until the first day of summer when it will stand quite high above the horizon at noon. This not only produces some of the longest days of the year (since the sun spends more time crossing our daytime sky), it also produces the shortest midday shadows of the year.

From that day forward, the sun will begin its long descent in the midday sky, reaching its lowest elevation of the year once again on Dec. 21. Then, the length of our daytimes are near their shortest, but our midday shadows are very long.

This phenomenon is the result of the tilt of the Earth's axis, and it happens year in and year out. Astronomers know each of these dates (when the sun reaches its highest and lowest points) as a "solstice," a word that comes to us from Latin and means "sun stands still." And it's true that, on those days, the sun does stand still – at least in its annual oscillation in height above our midday horizon.

Now, anyone familiar with basic trigonometry knows that one can use it to calculate the height of any object simply by knowing the angle at which sunlight falls on it and the length of the shadow it casts. But what if the very thought of trigonometry makes your eyes roll back into your head? Well, don't worry because around this time of year you can do the same thing without knowing a sine from a sign, at least for a few days, anyway.

The reason is that, twice during the sun's annual oscillation in the noontime sky, the sun reaches a point 45 degrees above the southern horizon. At those times – and for a few days before and after – an interesting phenomenon takes place: The length of all midday shadows equal the height of the objects that cast them.

The dates that this happens depend on your town's location. Sky watchers in Southern California, for example, will see this occur during mid-February. In the New York City area, it will happen at the end of the first week of March, and in the Midwest around mid-March.

Knowing this you can estimate the heights of objects too tall to measure directly, without knowing basic trigonometry. For example, suppose you'd like to monitor the growth of a tree in your backyard. Simply measure the length of its noontime shadow along the flat ground on these days each year, and you can keep track of its progress.

You can look up the maximum midday height the sun reaches at your location by visiting the following website: aa.usno.navy.mil/data/mrst. Simply enter your town and state, along with a range of dates, and you will get a table showing the time that the sun "transits" the midday sky and its height at that moment.

When the sun is 45 degrees above the horizon you can estimate the height of anything by just measuring the length of its shadow!