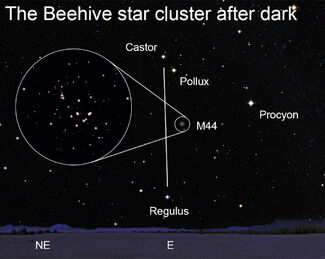 The Beehive Cluster is an open cluster in the constellation Cancer.

Every year around this time, when it seems that wintertime will just never end, I begin looking for signs of springtime.

As a child, I'd spend part of each February day on my knees in my mom's garden, brushing away the snow in search of green buds that might be poking through the soil. I'm sure the neighbors must have wondered about the curious habits of that goofy kid down the street but, ahh, when I found those first signs of life it made all those strange glances worthwhile.

I was absolutely thrilled. The days would soon be growing longer, the temperatures would be rising, and the flowers of springtime were indeed on their way, accompanied by those amazing little pollinators: the bees.

Now, lest you think that bees and springtime come only to our terrestrial environment, think again, for you can easily find them both in the heavens as well.

This week, not long after dark, go outdoors and cast your gaze midway up in the eastern sky. There you'll find a pair of bright stars named Castor and Pollux that represent the heads of Gemini, the twins. Directly below – much nearer to the horizon – shines the bright star Regulus, part of the constellation Leo, the lion.

Midway between lies the extremely faint constellation Cancer, the crab, and within – just to the right of a line connecting the stars Castor and Regulus – lies a hazy smudge of light known to astronomers as M44.

It wasn't until the 17th century when astronomers aimed the recently invented telescope in its direction that they discovered its true nature. Today, even inexpensive binoculars show it as a beautiful cluster of many dozens of stars that give rise to its proper name – the Praesepe or Beehive – perhaps because it appears as a collection of bees swarming around their hive.

If you've got a clear, dark sky far from city lights, you'll find that the Beehive is not that difficult to spot with the unaided eye. If you live in or near a city, however, it might be impossible without some optical assistance.

The Beehive has been known to stargazers since at least the time of the Greek writer Aratus in 260 B.C. In 130 B.C., Hipparchus included it in his star catalog and called it "Little Cloud" or "Cloudy Star". And the second-century astronomer Claudius Ptolemy described it in his famous book "Almagest" as "The Nebulous Mass in the Breast (of Cancer)".

Interestingly, ancient sky watchers used this cluster to forecast their weather. The philosophers Aratus and Pliny both wrote that, when they could see the cluster, the skies would be fair, but when it was invisible, a change in weather was surely on its way.

Today we know that the technique works well because high cirrus clouds that often precede a storm can easily blot this cluster from view while leaving the much brighter stars around the sky to shine through unaffected.

If you're like I am and have had just about enough of winter, go outside tonight, look skyward, and check out the Beehive. It's a sure sign that springtime is not all that far away.