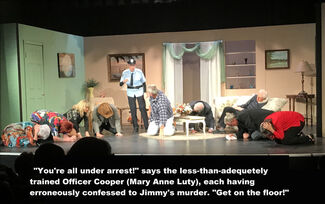 The bumbling Officer Cooper takes control of murder suspects while her boss, Officer Linda, is away.

Leave it to Richard Dopp to utter not a single word of dialogue in BSPAC's encore presentation of "No Body Like Jimmy" this past weekend, yet still get laughs galore. Like I wrote in the March 2021 review, Dopp is brilliantly catatonic. His muted presence, ranging from total silence to a seemingly unending string of voiceless theatrics, are textbook examples of brilliant miming combined with silentious quietude and a persistent zipping of a wordless mouth. And he must do his entire clammed-up shtick mostly from the living room couch with his eyes closed...and wearing sunglasses. For an actor, it's nothing short of the role of a lifetime.

Jimmy is dead from the get-go, remains dead through two acts as he's continuously moved hither and yon, with his well-rehearsed movements around the stage culminating when the 10 other cast members take their curtain call and Jimmy is finally dragged front and center, lifted upright, and played like a marionette for his thunderous, well-deserved applause. He was, unsurprisingly, left speechless by the recognition. Hey, that's show biz, folks.

"Jimmy" is indeed a farcical, funny stage play, written by Burton Bumgarner in 2012 and directed for our local stage by George Keith. Suspension of disbelief is something one gets used to in this play simply because the results are funny, and that's okay IF it's funny.

The actors in support of Jimmy's soundless style all offer up fine comedic efforts to reveal facts and self-delusion during the party, hosted by Ralph (Gary Edwards) and Eloise (Ernarae Bisset) Vanlandingham, who is running for Congress; the mere presence of a dead body in the living room bodes ill for her political future. And they each have the notion, albeit a false one, that it's them who killed the soundless gangster.

Ralph has a college friend from hell named Harold (Michael Germuska), who has the well-practiced habit of engaging in unintentional felonies, misdemeanors, and general lawlessness, getting Ralph in trouble at every opportunity. Germuska plays the role of a body-stasher like a naïve New Jersey mob underling who get in over his head due to miscommunication.

In fact, the whole play rests on miscommunication, starting with Ralph trying to convince everyone Jimmy is alive but is not feeling well and refuses to speak. That's because Jimmy remains dead throughout the play, despite folks speaking to him and handing him drinks that are quickly consumed by Baxter the caterer (Jay Hazelrigg), who gets more comically inebriated as the play progresses. Then there's the grandiose, faux-intellectual speech writer Nigel (Craig Johnson) who puts two and two together about running over Jimmy with his car (he fell out of a car driven by one of the guests trying to stash the body), and comes up with an answer of three; he seemed to miss the part about Jimmy already being dead.

So it's up to the suspicious, tough-minded Officer Linda (Elaine Hazelrigg) and her nincompoop assistant Officer Cooper (Mary Anne Luty) to solve the mystery. Truth-telling has never been so difficult in dealing with such characters as this bunch. And of course there is so much miscommunication between the suspects (that is, the entire cast) that such a finding is nigh impossible because they each have reason to blame themselves for Jimmy's demise. Thrown into the mix of miscommunication is the belief by the perfectly accented, Texas-based political donors Rick (John Young) and Emma, perfect gold-digging eye candy Emma (Micki Alfont), who think Officer Linda's cryptic suspicions relate to their hiring of an illegal alien as a housekeeper.

The campaign manager, Diane (Jennie Edwards), is very convincing as a person who tends to run her mouth ad infinitum while decrying those who do the same. Campaign managers are like that.

It's left up to Ralph to try his utmost to bring reason and sanity to the situation, but he's plagued by miscommunication all around him.

In the end, however, silence is indeed golden, as they all realize the error of their thinking ways, and no one gets arrested. Jimmy is still dead, but he will live forever in the minds of those who appreciate a few good laughs.