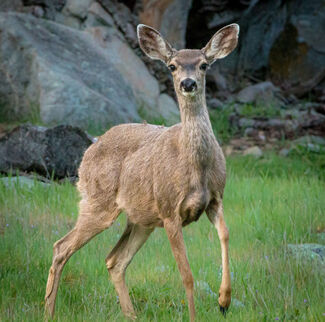 The morning sun was just beginning to sweep across the landscape as I came down Montezuma Grade around the sweeping curve into Culp Valley.

My eye caught a large animal standing in the middle of the field.

Slowing down and looking closer I realized it was a magnificent buck mule deer surrounded by several dogs.

His massive antlers extended well beyond his ears, and he was alert and watching me closely.

I've seen bighorn sheep in this area many times, but this was my first encounter with mule deer in Culp Valley.

Hoping to get closer for a photo, I turned off on the old Culp Valley Jeep Trail, but the majestic buck was now on a dead run followed more casually by the half dozen females he had been escorting. He was gone before I could get his picture.

Mule deer, so named because of their large ears, are common residents of Anza-Borrego Desert State Park, but most commonly seen at higher elevations. Males have antlers that are shed each year.

Game cameras have recently captured deer in the wetlands of Sentenac Cienega, but you are more likely to see them in areas where there is dependable water, available food, and cover.

Sightings of mule deer have been recorded on iNaturalist.com in many areas of the park, but primarily along the western fringe or at some lower elevations where there are natural springs.

Mule deer are large mammals that feed on grass and shrubby vegetation and acorns.

Typically, you will see them most active when feeding in early mornings and late in the day and at night. Midday, deer will find secluded places where they can safely bed down and process the food they have eaten.

Where there are deer, there are mountain lions, because deer are a primary source of food for the big cats.