Brightest Stars of the Year 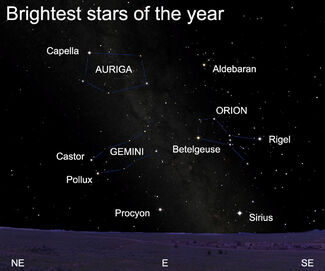 If you haven't been stargazing for a while, you might be surprised to step outdoors under a dark sky to see the stars rising in the east during late December.

You may often hear astronomers refer to the winter sky as the most brilliant of the year. What we mean, of course, is that the stars appear much more dazzling during the Northern Hemisphere winter than during any other season of the year.

Folks tend to think that the stars shine so brilliantly at this time of year because the weather is so cold and crisp and that this somehow makes the stars appear brighter, but there's actually a more fundamental reason for the stars' brilliance: The winter night sky contains more bright stars than it does during any other season. It really is as simple as that.

Each season of the year features its own collection of stars and constellations; the springtime and autumn skies contain relatively few bright stars, and the summertime sky features the magnificent band of the Milky Way arching overhead.

But the winter sky – oh, man, that is something else!

Just a few hours after dark during late December, January and February, step outside and you'll be able to find eight of the 25 brightest stars in all the heavens. The most dazzling, of course, is Sirius – the main star in Canis Major, the great dog.

This week can now find this sparkling gem low in the southeastern sky shortly after dark. It may appear to twinkle wildly as it rises over the horizon; this occurs because its low elevation means its light must pass through a greater column of turbulent air on its way to our eyes than when it's higher in the sky.

Sirius is the most brilliant star in all the heavens (except, of course, for the sun!) It outshines number two – Capella, in Auriga, the charioteer – by more than four times. You'll easily spot Capella high in the east-northeastern sky after dark this month. It is the brightest star in a pentagon-shaped grouping that is much easier to trace than a charioteer.

Following Capella are, in order of decreasing brightness, Rigel (marking the southwestern corner of Orion, the hunter), Procyon (in Canis Minor, the lesser dog), reddish Betelgeuse (the northeastern-most corner of Orion), Aldebaran (the brightest in Taurus, the bull), Pollux (in Gemini, the twins), and Castor (also in Gemini).

If seeing so many bright stars in the sky isn't impressive enough for you, just wait until mid-January. You'll have another brilliant celestial object to add to the collection, one that's considerably brighter than all these stellar gems combined. I'm referring to, of course, the moon.

The advantage of this brilliant winter sky is that one doesn't need to venture far off into the wilderness to see it. Even urban stargazers can easily enjoy the display right from home.

If, however, you decide to travel to a dark-sky site for your stargazing this winter, you'll need to bundle up and take some warm liquids with you. I promise that your extra effort will be rewarded by the glittering stars that make up this magnificent wintertime night sky.