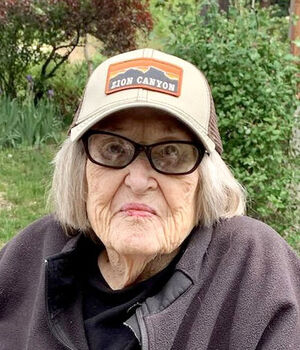 Barbara was born December 22 1929 in Lyons Colorado, the daughter of John and Vivian Overman.

Barbara was a graduate from the University of Washington and went on to also get a degree in education from San Diego State University. She started teaching at Scripps Elementary in La Jolla, California.

After teaching, she worked alongside Fred in their Store "The Scotts" located in La Jolla, California.

Barbara was a valuable member of the Soroptimist International of La Jolla. Barbara helped organize and participated in the La Jolla Vaudeville, one of the local Soroptimist's major fundraising events. In 1993, she was honored with the "Women of Distinction Award."

In the 80s, Barbara and Fred opened a branch of "The Scotts" in Borrego Springs, California. In 1989, Barbara and Fred went into semi-retirement and closed the store in La Jolla, keeping the Borrego store until 1992.

After closing the Borrego store, Barbara and Fred purchased land on the Clearwater River near Lewiston, Idaho and started the Snowbird lifestyle, summers in Idaho and winters in Borrego Springs.

While wintering in Borrego, Barbara and Fred attended St. Barnabas Episcopal church. Barbara was one of the inspirations behind the creation of the St. Barnabas Meditation Labyrinth. Barbara also helped build a tutoring program for the middle and high school in Borrego. She enjoyed making a difference in the lives of Borrego's youth. Throughout her life, Barbara was involved in many philanthropic endeavors.

Barbara was preceded in death by her husband Fred, son Mark and grandson Trevor.

Barbara is survived by her sons, David and Geoffrey (Jennifer), and her five grandchildren, Mathew, Morgan, Amy, Taylor and Brian.