The PAC is Back! 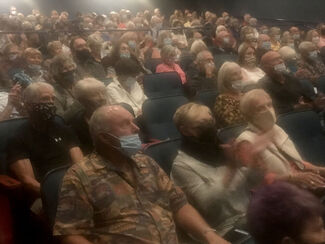 It's been a very long 20 months without a performance at the Borrego Springs Performing Arts Center, but strict COVID-19 protocols helped ensure the sold-out Opening Gala on Nov. 20 would be a huge success, given the Doo-wop and Jazz stylings of a very talented group of singers and musicians known by two names – the Cufflink Crooners & The Moonrays.

BSPAC Board of Directors President Dick Helvig opened the show honoring Jim and Anne Wermers, owners of the PAC and dedicated contributors to the BSPAC tradition. He also previewed the current season of performances. Then, he described how the theatre space had been renovated – thanks to about $150K in community grants and patron contributions – with a new state-of-the-art lighting system, remodeling of the lobby and ladies' restroom due to an unfortunate water heater malfunction that went unnoticed for a long, long time, and other upgrades.

The lights were held up in shipping delays and didn't get to Borrego until a week before the Gala, so it was All Hands On Deck to get the system up and running. Helvig, John Young (lighting and sound booth tech who is still only halfway through the accompanying lighting tech manuals), Elaine Tulving, Jay and Elaine Hazelrigg, Jim Wermers, and Gary Edwards all scrambled to pitch in and get the job done. The results are very impressive, including the ability to lower the overhead lights on cables for easy ground-level access. More upgrades to the theatre space are coming soon, including Surround-Sound, hopefully in time for the Borrego Film Festival.

The Cufflink Crooners opened the performance with the familiar 50's stylized theme song, Happy Daze from the TV show running for a decade in the 70s and 80s. The energy and stylings of each unique vocalist were put on full display, and together with fabulous saxophonist Sam Morgan, they kept up the energy for the entire 2-part show.

Songs from the 50's and 60's were the Crooner's focus, and Countertenor (falsetto) Paul Rico was in fine form, singing lead in perfectly harmonized versions of Blue Moon, Why Do Fools Fall in Love, Do You Love Me, as several examples.

After Intermission, Bass vocalist Ken White announced a slight delay in the performance by the Moonrays. His parents were expected soon, having driven all the way from Fresno, to catch the band at BSPAC, and they arrived to rousing audience applause. Then, Jeremy Schrick, Cody Jay, and Paul Rico went into the audience to greet Dear Old Dad to a highly comedic and wholly over-the-top rendition of Can't Sit Down, led onstage by White. The song and its musical stylings, and audience interaction, were obviously planned ahead, but combining it with an homage to White's late-arriving parents was indeed a thing of impromptu showmanship to behold.

The second act by the Moonrays was just as entertaining as the first, this time more jazz-based. Jeremy Schrick's solo on the 1960 Dean Martin classic How Lucky Can One Guy Be showed off Schrick's tenor styling, enhanced by Sam Morgan on sax. Wonderful performance.

Paul Rico then performed jazz great Ella Fitzgerald's Blue Skies in her "scat" tradition (vocal nonsense syllables imitating musical instruments), and Cody Jay sounded just like Frank Sinatra singing his 1960 classic, Fly Me to the Moon, encouraging the audience to sing along. They knew the lyrics, and it was great!

The whole evening was great, filled with performances in both harmony and dissonance, not to mention memorable solos, and we are all fortunate that the PAC is back for more this season.