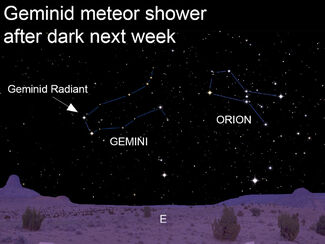 Ask any beginning stargazer which they think is the most spectacular meteor shower of the year and I'll bet most will name the Perseid shower of mid-August. Is it really the best, or is their answer influenced by other factors? My suspicion is the latter, and here's why.

During the Perseids, sky watchers can typically expect to see 50 or 60 meteors (aka shooting or falling stars) per hour – not a bad number in anyone's book. But during a typical Geminid shower, hourly rates can reach as high as 100 or 120.

Most impressive, however, is that the Geminids often produce brilliant fireballs that can light up the heavens, cast a shadow, and sometimes even leave a smoky trail behind. And you can often use binoculars to watch the remains of these trails for several minutes as they twist and turn in upper atmospheric air currents.

Why is it, then, that people don't cite the Geminids as their favorite? My guess is because it occurs during the wintertime, when people are not willing to sit outdoors in the cold to watch lights fall from the sky. Too bad, because I've always felt that the Geminid shower is definitely worth the effort.

Geminids seem to radiate from a point in the constellation Gemini, the twins, which, during early evening hours in mid-December, appears low in the east-northeastern sky. This means that stargazers who can't stay up late can still catch some meteor activity before retiring for the night. Around midnight, however, Gemini lies nearly straight overhead, and showers the sky with meteors falling in all directions and, if you trace their paths backward, the paths of those associated with the shower will intersect the constellation Gemini at a point (called the "radiant") just west of the bright star Castor.

During this year's shower, the good news is that no bright moonlight will interfere with our view after about 1 a.m. The bad news is that the shower peaks on a weeknight, making it tough for working folks to spend much time outdoors on the night of its maximum. Don't worry, though. You will be able to see Geminids the weekend before, weather permitting.

Officially, the shower peak occurs around 2 a.m. EST on Dec. 14 (11 p.m. PST) on Dec. 13, when the Earth plows head-on into the swarm of meteoric particles left behind by the peculiar asteroid 3200 Phaethon. This strange ball of rock has recently been found to be leaving a short gravelly tail behind it, giving rise to this unique shower.

Watching the sky show is not difficult at all, and you need no fancy optical equipment to enjoy it. My recommendations are simple. First, be sure to dress warmly and have on hand a thermos of hot chocolate, for example, to make the night even more enjoyable. Next, head out to a dark location far from the blinding lights of cities. And, finally, lie back on a sleeping bag or lawn chair and scan the entire sky with your eyes.

If you do these things, I'll bet you'll soon agree that the Geminids are, indeed, the best shower of the year!