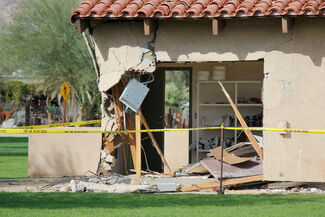 A man has been arrested after allegedly driving while impaired and crashing his pick-up truck into the building on Christmas Circle, causing extensive damages.

The incident occurred on Nov. 22 around 8 p.m. when those at the Red Ocotillo heard a loud crash. After investigating, they recalled seeing a truck impaled into the side of the building on Christmas Circle.

It was reported that prior to making his way into the building, the driver hit the yield sign on Borrego Springs Road, before swerving his way over the curb and crashing.

"It's unfortunate. The driver made a big mistake and it has caused a lot of damage. Extra work is being done – we've had to do some demolition. Luckily, some of our board members are experienced in construction," Jim Wilson of the Christmas Circle Foundation said.

According to Wilson, Rick Anson will be helping to reconstruct the building, and they had an insurance adjuster come and assess the cost of the damages. That information is expected to arrive soon.

Wilson says that it will possibly take up to two months to get everything back together.

The area that was hit damaged most of the electrical and parts of the kitchen, which all need to be replaced.

At this time, they have temporary power for the restrooms and the gazebo.

The driver did not suffer any serious injuries, and managed to walk off the scene. He was later identified and arrested.

This is not the first time a vehicle has done damage to Christmas Circle. In previous instances, damage was done to the grass and trees.