Caring About the Community

One Man's Efforts to Help Save Borrego Springs From Financial Ruin 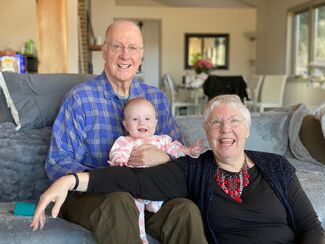 For anyone who has seen Borrego Water District Board Vice President Dr. Lyle Brecht in action over the past decade, in both public hearings and private business meetings, he's an example of a thinking process both inside and outside the box. Quiet-spoken, thoughtful, articulate, insightful, and driven by hard facts, Brecht has used his education, background, and critical analysis to become a powerful force within the Borrego community in his insistence on BWD fiscal sanity, much to the early displeasure of some of those holding different agendas. He still retains his own simple agenda: "Caring about the community." When that is a driving force, it's much easier to stay on track with tactical and strategic contributions and sound policy proposals.

But about two weeks ago, Lyle Brecht formally retired from BWD and, together with wife Laura, Rector at St. Barnabas Church, and will be moving to Boulder, Colorado in early December.

Within a month of arriving in Borrego, Brecht came to the inescapable conclusion that the District was in dire financial straits. Previously, he was a water commissioner in Tennessee. He had also "worked on the financial impacts of large-scale private sector and county-level development projects." In addition, he was an advisor regarding the economic impacts of large-scale federal programs and projects, working with 14 different federal agencies.

So, when Brecht saw something askew in our community, and talked openly about it, he knew from whence he spoke. He immediately decided to run for a BWD directorship, but in doing so, he ruffled more than a few feathers.

One would think that with all his experience, his fresh views would be welcomed, but some in the community, such as the late Bill Wright, thought otherwise. Fortunately, more voters sided with Brecht than not. And it took a while after Brecht's election to the BWD Board of Directors that Wright actually apologized to Brecht for misjudging his policy outlook.

~Kathy Dice, BWD Board President: Deciding to become a member of BWD was easy for me knowing that Lyle was on the Board. He has been a steadying influence on all of us, as we leaned on his wisdom to focus on the big picture in regard to our serious water issues. Over a decade ago, Lyle and Marshall Brecht (no relation) and Beth Hart were all elected at the same time, and they were critical to bringing BWD out of near-bankruptcy, with Lyle playing a leading role. I'm so grateful to Lyle for his enormous contribution to both BWD and our community. He will be SO missed!

On Jan. 11, 2011, Lyle Brecht, Beth Hart, and Marshal Brecht had all been newly elected and became the majority on the BWD Board. "The previous Board had little insight into the District's cash position," said Brecht, "regularly planned for and spent money to obtain grants that never materialized and were surprised when the banks refused to lend the District money." The BWD was close to bankruptcy, with cash reserves at an all-time low. A host of problems began to surface all at once, including a lack of transparency for prior BWD financial decisions, and solutions had to be found for all of them.

~Beth Hart, BWD Director: In late 2010, the Borrego Water District had around $300,000 in the bank, $7 million in promised debt, and it couldn't even secure a line of credit from the bank because of its financial position. Lyle Brecht had a vision for turning that around, plus the skill and leadership to make it happen. Over the next decade, working with others to strategize, plan and act, Lyle was a central force in moving the District forward to financial sustainability and security. We owe him so much, and I personally am grateful for his leadership, friendship and service.

One specific example of what Brecht regarded at the time as a wasteful drain on cash reserves, much relied upon by the previous Board, was "purchasing water credits instead of water rights." Credits are on paper only, and they have no intrinsic monetary value. It took a written statement, requested by Brecht, from the District banker to the Board to show the true scope of the problem, part of which included "merely cutting expenses to regain credit," which was not a viable option.

~Tammy Baker, BWD Director: In the one year I've had the opportunity to work with Lyle, I have come to appreciate his deep and lasting contributions to the financial health of the Borrego Water District and for his role in helping to create the plan that will guide us to sustainability of our water supply. I will miss his collegial style, his untiring dedication, his insights, and his sense of humor.

~Dave Duncan, BWD Director: Lyle's community-focused services on the Board will be missed. He is largely responsible for working for over a decade to ensure BWD's financial viability. His critical analysis was vital to BWD's financial recovery and success.

"It took eight years of sound fiscal management to regain our lost credit," said Brecht. "That enabled BWD to borrow $5.6 million and refinance the FY2018 debt at lower interest cost, plus borrow another $3 million in FY2021." This helped reduce fixed costs by about $1.2 million, as did BWD staff salaries frozen for three years, a change in the employee pension program back to the historical CALPERS program, and then eliminating $6 million in pending debt obligations.

There were other measures, some easier to implement than others, to restore fiscal sanity to BWD, most of them spearheaded by Brecht but supported by Beth Hart, Marshal Brecht, and the other two directors on the Board. These included:

- Replacement of all of the then current BWD consultants and advisors – attorneys, engineers, financial analysis, auditors, etc. (A consultant with the newly hired financial firm, Rafkelis, had told Brecht, "I've never seen a water district in such financial distress.")

- Writing off more than $1 million in improperly capitalized study expenses;

- A restructuring of the studies by the U.S. Geological Survey and U.S. Bureau of Reclamation to provide useful economic data, rather than a combined assumption that our Sub-basin was a lost cause;

- Two five-year processes to raise rates by more than 200% to meet sufficient revenue targets; and

- The start of building reserves up to specific dollar targets to save about $1 million in interest costs on financing.

Brecht said the most important decision by the Board was to avoid a contested adjudication in a courtroom over water rights and pumping limits until they had the money for legal expenses to initiate and get broad public and private support for what was to become a "stipulated adjudication." Brecht was a prime mover on that front.

~Diane Johnson, BWD Director: I've always stood in awe of Lyle's breadth of thinking, experience, and of course his intelligence. His planning skills and hard work have gotten the Water District into the decent financial position it is in now, as we face new water acquisition challenges as well as all the ongoing fundamental needs to maintain our essential infrastructure of pipes and pumps. But what folks might not have witnessed is his pleasure in working out complicated processes and strategies. Often when I've been a bit disheartened over obstacles, he's laughingly encouraged me to see the "fun" in thinking through the situation – the challenge of the intellectual puzzle. I will miss Lyle in many ways.

BWD in general, but Brecht in particular, had often been the subjects of hate mail from citizens who, after one BWD decision, for example, "believed that if they could merely turn on their faucets and water appeared, that was all they needed to know about running a water district!" Brecht also got calls at 7 a.m. from irate citizens, and he even had to throw out a person at one public meeting who was yelling at the Board.

~Harry Ehrlich, former BWD Director: My tenure of service alongside Lyle and the District was only about 3 1/2 years, including two years on the Board and two on committees, but the time working with Lyle was focused and productive in the areas of groundwater policy and financing of facilities and services. Lyle provided a unique perspective and insight on virtually all policy issues addressed by the Board, and he aided the District to successfully develop positive direction and solutions that will benefit the community for decades going forward. On difficult policy issues, with Lyle's leadership, we were able to discuss them and move forward with agreement to solve them. Lyle provided needed vision and insights for the Borrego Springs community. I appreciated his personal and professional service and commitment of numerous hours each week/month for the District.

Borregans had finally found out we were all in trouble regarding water consumption from Agriculture, Golf Courses, and municipal use. We currently have an overdraft deficit of 13,000 acre-feet per year, all that coming from a single limited and ever-diminishing source – our aquifer-based groundwater supply. A 75% reduction became the target of California's Sustainable Groundwater Management Act (SGMA), one with enormous impact on all sectors, but it will be, according to water experts, about two decades before that target is met. The good news is that farmers, golf course owners, and business owners are all working the problem in a spirit of cooperation, alongside BWD and the recently formed Watermaster Board (Brecht reports that the whole process went smoothly) under the Stipulated Adjudication. Again, "caring about the community" is critical.

We end this retrospective with a statement from a Borregan who knows Dr. Lyle Brecht very well, having worked side by side with the man for five years:

~Geoff Poole, General Manager BWD: Borrego Springs is filled with interesting people, and Lyle definitely fits that mold. Hearing his stories about the various major projects he had worked on over the years before he found Borrego Springs was fascinating. Then, to hear the stories about the challenges facing BWD at that time he arrived, and the actions taken by Lyle and others were remarkable. In the five years since my arrival, I had the opportunity to work very closely with Lyle, and his dedication and commitment to BWD is unsurpassed. Thank God he found us, and he will be missed. The entire BWD Staff wishes you the best, Lyle and Laura.