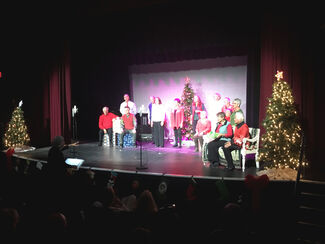 It was time to "Celebrate the Season" at the Performing Arts Center on Dec. 11, and the ensemble performance, Directed by George Keith (with Ensemble Director Julie Kehler) and Produced by Elaine Hazelrigg, was definitely a much-needed celebration in these trying times.

After an introduction by Jeff Salton, the Ensemble launched into the highly energetic and multiple voice-range numbers, "It's the Most Wonderful Time of the Year" and "Winter Wonderland." The harmonies were wonderful.

An early highlight was a poignant reading by Craig Johnson of "The Christmas Truce," no less than a riveting description of embattled American and German soldiers during World War II engaged in trench warfare, where all along the Western Front many soldiers ceased hostilities during an otherwise raging and bloody conflict, starting on Christmas Eve in 1914, to show a true touch of humanity, including singing and food exchanges. The event was totally unsanctioned by military commanders, but somehow it happened anyway. Google it and read the fascinating details.

Another highlight of the evening was "Christmas Rum Cake," with Elaine Hazelrigg doing a cooking demo piece, perhaps channeling a tipsy Julia Child, where adding recipe contents to the mix kept getting interrupted by her frequent swigs from her bottle of rum. Needless to say, by the end she was sloshed, and the resulting rum cake was nothing short of a disaster, making the bit that much funnier.

A flute trio montage by Jennie Edwards, Elaine Tulving, and Jinny Perin showed off impressive instrumental talents. And for vocals, also an audience favorite entitled, "Three Jazzy Bell Carols," sung with exquisite harmony (and with appropriate jazz dissonance). In a separate number usually requiring bells, they used no bells, only white gloves in a clever mime routine in time with piped-in music.

And then Santa Clause made his appearance. Fred Jee sure looked the part, and his rants about all the hassles and complaints Santa had received was good fodder between his otherwise happy-go-lucky self.

And for the stirring vocal finale, the Reverend Son Ye's normally quiet speaking voice was replaced by his solo, "O Holy Night," moving with ease up and down the scale with his ever more powerful tenor voice, and at the end he hit those high-notes, and on key, elusive to some.

And while the whole evening was filled with fine music, choreography, and onstage Christmas delights for all, mere words alone cannot possibly describe the feeling of awe at the visual and audio stage spectacle unfolding during the final musical number of the evening, performed by the Dark Sky Silent Knights, a group of mysterious performers with questionable origins. But I'll give it a shot, with a little assistance from Adobe Photoshop on the pic below.

You're in the BSPAC theatre listening to the audio version of the Mormon Tabernacle Choir, singing the ever-soaring music and lyrics of "Hallelujah." Up on stage in two rows, front and back, are 16 ninja-like performers, named the Dark Sky Silent Knights, dressed in black (including those ubiquitous COVID masks), who don't sing a word, but rather held up, one at a time, their individual stack of cue cards matched to the syllables in the Hallelujah chorus. The lyrics start slow but then come pretty fast and furious, so it was no mean feat to pull those cards up and down, one at a time, and in sync with the musical beat.

Compared with stadium card displays, this beat all of them hands down, because these "Knights of Precision Choreography," as I call them, couldn't be so much as one musical beat early or late. In order down the rows, or with back and front lines alternating, they flashed their individual cue cards in perfect synch with the musical background, pulling off a flawless, highly complex and truly entertaining routine.

I guess you have to be a live witness to this unique performance to appreciate it. An audience standing ovation replete with whoops and whistles was pretty clear proof we did. Catch it next year if you can. The evening was highly entertaining and certainly helped the audience get into the Christmas spirit.