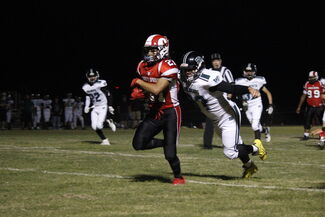 Kicking off October, it was the friendly rivalry "Battle of the Springs" game between Borrego Springs and Warner Springs, as well as the Rams' homecoming game.

It was a battle from both sides, but the bronze/silver trophy ultimately went to Warner Springs. It's OK, Rams, the trophy is on just a little vacation.

The Warner Springs Wildcats took back the trophy for the first time in a long time, and spoiled the Rams' homecoming in quite the high scoring game, 48 – 39.

"They came to play, and I think we kind of took for granted that we've been able to beat them every year and keep that trophy; even I did. I kept that trophy in my room expecting it to stay right there. They showed up, our kids did too, they battled hard, but we took some early injuries again," head coach Tim White said. "I think that unfortunately two years of football off is catching up to us a little bit, and it's showing."

The last time these two teams met, it was quite a high scoring game as well, where the Rams bested the Wildcats, 69 –40.

Against Warner Springs, the Wildcats were on the board first to start the game off with a huge 70-yard touchdown. The two-point conversion was no good, but were up 6 – 0.

It was time for the Rams to answer back, and they did just that. Senior quarterback and defensive back Cesar Ochoa returned the kickoff to midfield, a good place to start their opening drive.

It was the Wildcats' turn, but that was quickly stopped as they fumbled the ball on their second snap, and it was nicely recovered by sophomore defensive back and wide receiver Wesley Sexton, who has continued to prove his dominance on defense.

The Rams were back on offense with a nice set up for Ochoa to find sophomore wide receiver and linebacker Pedro Rodriguez open for the first down near the 20-yard line in Wildcats territory.

However, a sack and false start pushed the Rams back.

A big run by senior running back and defensive back Even Padilla, who broke through defenders to get to the two-yard, gave the Rams the edge to score once again.

This was Padilla's first game of the season, after being out due to an injury.

"He's the most dynamic player beside Cesar (Ochoa) that we have on the field, and when those two are on the field together, it makes it very difficult to stop them. We desperately need him, but he's still not 100%, so it makes it tough to keep him out there and hasn't been out there for a few weeks. The game shape wasn't there and you can see it after a few plays, and he wanted to break already, but he's a warrior and if he's ready to go, I know he'll be out there giving it his all." White said.

With 7:42 left in the first quarter, Ochoa with the quarterback keeper, and the extra-point a miss, the Rams led, 13 – 6.

Going into the second quarter with the lead, the Rams hoped to extend their lead.

However, it seemed the Wildcats were chipping away at yardage, as they attempted to tie or take the lead.

With a fourth down and about half a yard to go, the Wildcats decided to go for it. But the receivers were defended well, and an incomplete pass gave the Rams the ball with turnover on downs.

However, the ball was fumbled on a good scramble run, and it went right back to the Wildcats.

The Wildcats could not get much and attempted a fake punt, but was stopped by senior defensive and offensive lineman Moses Garcia.

Junior running back and linebacker Julio Medina helped the Rams extend their lead with a three-yard rushing touchdown. The Rams attempt for a two-point conversion was no good, 19 – 6.

The Wildcats answered right back with a wide-open complete pass down the right side, and the two-point conversion was good, 19 – 14.

Sexton, once again, bobbed and weaved through defenders on the kickoff return, converting it into a touchdown. However, a big sigh was brought, as a flag was thrown for holding, bringing it right back to the Rams' 46-yard line.

The momentum began to shift and the rhythm seemed to be going in favor of the Wildcats. The energy was deflating as the lead looked like it would be lost.

With two minutes to go in the second quarter and in the half, the Wildcats scored and with their two-point conversion good, they led 22 – 19.

- Seniors, King and Queen: Even Padilla and Isabel Arteaga

With nine minutes on the clock in the third quarter, the Rams decided to go for it on fourth and long, and it worked out in their favor, as Ochoa found Padilla, who miraculously made the catch while being closely defended, enough for the first down at the two-yard line.

The Rams retook the lead with a hitch to Arias. The extra-point was blocked, but the Rams led, 25 – 22.

The lead was not held for too long, as the Wildcats scored yet another touchdown to answer back. Their two-point attempt was no good, 28 – 25.

It all came down to the fourth quarter. Would the Rams retake and hold the lead to keep the trophy and bragging rights, or would the Wildcats manage to stay on top?

It was an intense game for sure, as both teams knew what was at stake.

To start the fourth quarter, the Wildcats extended their lead with another touchdown, 34 – 25.

It was a back-and-forth possession that followed, but as the Wildcats were making way, Ochoa intercepted their chances at the 50.

Ochoa again found Arias for the touchdown. The attempt for a two-point conversion was no good, and the Rams were down, 34 – 31.

Midway through the fourth quarter, the Wildcats were chipping away at yardage and managed to extend their lead with two more scores, 48 – 31.

As the clock was winding down, the Rams did not give up so easily. The Rams scored one last time, and that was all they could get, 48 – 39.

The team will return home on Oct. 15 to face St. Joseph Academy for their last home game of the regular season. Kickoff is set for 7 p.m. This game is also senior night, so all are encouraged to come out and cheer on their Borrego High football seniors.