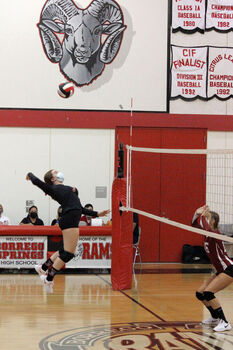 After a kill down the middle, senior Brianna Del Bono continues to be a force at the net, unable to be stopped.

As with many good things, sometimes they must come to an end. After the Lady Rams volleyball team undefeated winning streak was snapped at six, they surely bounced back in a three set sweep against crosstown rivals, the Julian Lady Eagles, avoiding a three-game skid.

Even with the absence of senior Isabel Arteaga, the Lady Rams stayed consistent and solid in what was a game of aces and kills at the net.

Prior to that, the team also faced Desert Mirage in an away game on Sept. 2, where their win streak was snapped in a three set sweep.

The Lady Rams were back at home against Guajome Park Academy hoping to shake off that loss, and were faced with an intense game going into five sets. However, Guajome Park got the upper hand, winning 3 –2.

The Lady Rams were to face Warner Springs on Sept. 14, which took place after print, but that game was canceled.

In the game against Julian, after a service error by the Lady Eagles, the Lady Rams began their hot streak with consecutive aces by junior Jimena Ochoa.

The Lady Eagles managed to stop the bleeding, and were finally on the board, after a miscue by the Lady Rams, who did not let that affect them one bit.

Senior Brianna Del Bono did what she does best at the net with a kill down the middle, as the Lady Rams extended their lead, 7 – 2.

Sophomore Miriam Hernandez and senior Lupita Arias helped extend the Lady Rams lead with a pair of aces of their own, followed by back-to-back kills by Ochoa and Del Bono, pushing the Lady Rams to lead 18 – 7.

Hernandez is second on the team with serving aces, right behind Arteaga.

With much back-and-forth and the Lady Rams continuing to keep their momentum going, won the first set 25 – 11.

Julian took advantage of the miscues by Borrego to catch up, attempting to rally and make a comeback, but the Lady Rams stayed in control enough to take the set.

The Lady Rams picked up right where they left off, and once again, Ochoa served up solid aces to give them a 4 – 0 lead.

Then errors by the Lady Eagles, an ace by Ochoa and yet another kill by Del Bono pushed the Lady Rams up 8 – 0.

The Lady Eagles, however, did not give up that early. They made their way, taking advantage of errors by the Lady Rams to cut the lead, 13 – 5.

It seemed the momentum slowly shifted in their favor, but found its way back to Borrego. The Lady Rams kept a strong rally going to make sure any comeback would be far fetched.

A nice set by senior Angelina Sanchez to Ochoa for a volley the Lady Eagles did not anticipate ended the set, 25 – 11.

The third set went in a blink of an eye, as the momentum was on Borrego's side, and never left.

A service error by the Lady Eagles put the Rams up on the board, and adding to that was a kill by Del Bono.

Ochoa continued to serve up those aces and Del Bono dominating at the net proved to be too much of a force for the Lady Eagles.

Del Bono leads the team in kills, followed by Ochoa.

The Lady Eagles were finally on the board with a service error by the Lady Rams, 10 – 1.

Hernandez added more aces and the Lady Rams continued their strong rhythm from all over the court.

The Lady Rams controlled a sizable lead, and won the last set, 25 – 7, to complete the three-set sweep.

The team was expected to face Warner Springs two more times, at home and away, respectively, on Sept. 16 and Sept. 21, but those games will not take place at the time of this print.

The Lady Rams will then face Desert Mirage at home on Sept. 23 at 5 p.m. Then will have another game at home against West Shores on Sept. 30, 5 p.m.