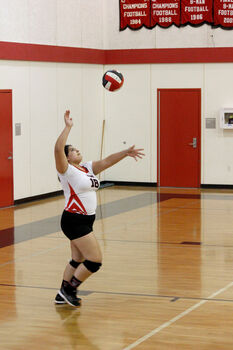 The Lady Rams JV volleyball team looked to bounce back against the Hamilton Lady Bobcats, and be on the winning end this time around. However, despite solid performances all around, Hamilton took this one in three sets, 2 – 1.

The team also faced the Calipatria Lady Hornets, and were defeated 2 – 0.

Hamilton was on the board first with rallies working in their favor. It just seemed the momentum would not shift, as Borrego was down 11 – 0.

The Lady Rams got a break with a side out, then a pair of service errors on both sides, 12 – 2.

Sophomore Elena Sanchez and senior Dulce Arias shared a pair of aces, however, the Lady Rams were still down, 18 – 9. Junior Alexandra Reyes got in on the fun of serving up some aces to cut the lead, 20 – 13.

As they took advantage of errors by Hamilton, Borrego started a comeback, and took control of the rally, and cut their deficit, 22 – 19.

In the second set, Reyes continued her hot serving start, getting a pair of aces to give the Lady Rams their first lead of the game, 2 – 0.

The Lady Rams had a much better handle of the ball, and were moving everywhere on the court, pushing their lead to 10, 14 – 4.

However, a miscommunication error broke the streak, and the Lady Bobcats were back on the board. The Lady Rams still led, 19 – 5.

Despite a rally and an attempted comeback, the Lady Rams pulled away with the win, 25 – 14.

In the third and final set of the game, both teams kept it close.

But it seemed that the Lady Bobcats of Hamilton had the upper hand, and found themselves with the rhythm on their side, and took the win, and the game, 15 – 12.

The JV team is back on the court against Desert Mirage in an away game on Sept. 2, beginning at 3:10 p.m.