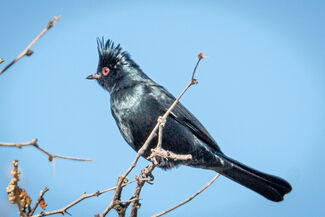 He's a handsome critter with a funny name, but one of the more distinctive birds that call Anza-Borrego home.

I'm talking about the phainopepla, a resident bird easily identified by a distinctive crest and bright red eyes.

Males are particularly dashing with silky, jet-black feathers. Females look the same but are a dusky gray in color.

Their name comes from Greek phainopepla which means "shining robe."

You'll have to admit, phainopepla is a tongue twister, and some have referred to the bird as a black cardinal. In reality they are not related to cardinals at all, instead they are part of the silky flycatcher family.

It has also been suggested they be called Farmer Birds because of their habit of feeding on desert mistletoe and then depositing the seeds that have passed through their digesting system while perching on other trees that then sprout into new clusters of mistletoe, providing a future food supply.

They will consume as many as 1,000 mistletoe seeds a day.

Along with the phainopepla's fondness for mistletoe, they also eat insects.

These are common birds here in Borrego, visible in all areas and during all seasons, however their numbers do decline a bit in the summer when they often travel to coastal areas of the region.

The phainopepla is a sleek bird, about 7.5-inches in length with long tail feathers and a wingspan of just under a foot.

When in flight, the males display white patches on their wings, and they fly in an up and down motion. They are nervous birds, often seen perched at the very top of trees and shrubs where they can spot and quickly flee from an approaching threat.

A good place to see the phainopepla are in the Mesquite Bosque in the Borrego Sink, off the end of Old Springs Road.

There is soft sand here, so either a four-wheel-drive vehicle or short hike will take you into the area dotted with catclaw mesquite that is a phainopepla favorite.

The mesquite thickets at Lower Willows in Coyote Canyon are another good place to see phainopeplas. During the annual Christmas Bird Count, this is one of the more frequently spotted birds in that area. Because the phainopepla is such a Nervous Nelly, you will have a better chance of seeing one by sitting still.

Once you have located an area with mesquite and desert mistletoe, just sitting quietly close by will often result in the phainopepla landing on a tree near you. Look for little piles of seeds that have been deposited on the mesquite branches, usually near the top of the tree. This is where they perch and are likely to return.