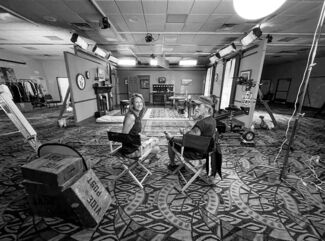 Directors, Alicia Wszelaki and Russell Webb in front of their soundstage constructed in the conference room of The Borrego Springs Resort and Spa.

Lost that Christmas magic? Not looking forward to Holiday celebrations? Alicia Wszelaki, co-owner of Path 88 Productions, and Russell Webb have an antidote. It's called "A Gift for All Ages," and will premiere at the Borrego Springs Film Festival, January 17, 2022.

The 30-minute short film, titled "A Gift for All Ages," was filmed in Borrego Springs at the Borrego Springs Resort and Spa, was the inspiration of Russell Webb, who was the executive producer and underwrote the cost of the pre-production phase. Alicia Wszelaki was the co-director and her partner, Matthew Nothelfer, handled the filming.

This was a new role for Wszelaki and dream come true for her, directing her first scripted movie. Nothelfer, co-owner of Path 88 Productions was the film's cinematographer.

"People will walk away feeling good and believing in goodness again. It's a movie that's magical and filled with holiday spirit. Making the show inspired us. And, like the crew – all of us – who participated in its creation, I guarantee the audience will be inspired," Wszelaki said about the film.

"I mean, you really have to be inspired to film a Christmas story in the desert in the middle of August. It was 116 degrees in Borrego the day of the dress rehearsal. Fortunately, inside it was only 70 degrees."

It all started with Borrego Springs resident Russell Webb. He always wanted to produce a movie and never had the opportunity.

"He recognized that opportunity for this play and "went for it." As we are all on the Borrego Springs Film Festival committee together, he reached out to us after seeing our past productions," Wszelaki said.

So for his 75th birthday, he decided to bring his dream to life, and underwrote the adaptation and pre-production of the 30-minute movie short for "A Gift for All Ages." Webb was not only the executive producer, but the set designer and one of the actors. Webb has been acting since 1960, and began working on set design in 1968. He became aware of the stage play, which the film is based on, in late 2019.

Like Webb, the main character in the film has an unfulfilled career, and the plot is about the man who wrote the world's most famous Christmas poem and back story of its creation. However, Wszelaki is keeping the identity of that person a secret, waiting to be revealed to the show's audiences.

"However, two lines into the poem and everyone will recognize it," Wszelaki said.

"One of the things about the movie is that the story is timeless and transcends Christmas, as well as the story's 1823 origins, in New York. Today, the achievement of the main character is a poem that is iconic and synonymous with Christmas around the world."

The movie is filmed in black and white to emulate the Golden Era of Movies – the 1940's – Hollywood's heyday, which produced such classic films as Casablanca. The set is an early 19th century apartment, built in the ballroom of the Borrego Springs Resort.

"We chose the resort because they offer the space that would make our soundstage come to life the way Russell envisioned it," noted Wszelaki.

The one room set was designed by Webb and Nothelfer, taking four days to construct the set, and three more days to furnish it for its transformation into an early 19th century New York City apartment. Wszelaki gave special credit to Lee Christman who came in from Arkansas to help with construction and props for the production. The design concept for the set took a few months, and actual construction took four days, with three additional days to furnish it with props.

In fact, Wszelaki believes the film extols the abundance of artistic talent that exists in Borrego Springs.

"From production and extra's to set designing and costumes, 'A Gift for All Ages' is a Borrego inspired creation."

The movie took five days to film, with the cast having an on-site table read and rehearsal on August 28 and 29. Actual filming took place August 30 thru September 3.

"We are asking for donations to raise a significant amount of money we need to finish the movie, and optimistic the community will want to help us put Borrego on the map for film making – along with its other artistic achievements," stated Wszelaki.

The plan is to place the film on the film festival circuit.

"The whole idea of the movie is to believe in yourself and others," she said. "Like the theme of the film, so many people were inspired by the project and believe the movie is special, it will be successful."

Follow the film's journey by visiting their social media "Gift For All Ages Film" and their website AGiftForAllAgesFilm.com