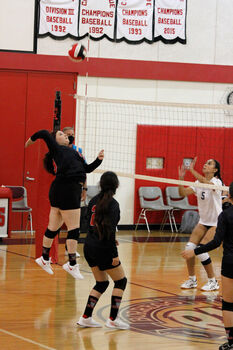 Junior Jimena Ochoa kills the ball past two blockers at the net.

The Lady Rams Varsity Volleyball team continued to ride its momentum going into their first home game of the season.

They looked to keep their streak going as they traveled to face the Lady Bobcats of Hamilton High School, which took place after print.

Against the Lady Knights of Victory Christian, it was back-and-forth to begin the first set.

With errors by Victory Christian and consecutive aces by junior Jimena Ochoa, the Lady Rams pulled further ahead, 15 – 8.

Senior Angelina Sanchez got in on the fun of serving up an ace, and continued to the streak.

The Lady Rams seemed to have all the control of the rallies, and despite the Lady Knights trying to break that momentum, Borrego came away with the first set win.

In the second set, same as the first, it was once again back-and-forth.

Senior Isabel Arteaga was a force at the net, as her consistent kills were too much for the Lady Knights of Victory Christian, 11 – 5.

However, errors began to catch up to the Lady Rams as the set was slipping away and were only up by one, 13 – 12.

But the defensive tactics of Del Bono, Arteaga and sophomore Mariana Torres kept the rallies alive. A huge block by Del Bono at the net saved the rally to go in favor of the Lady Rams.

All the momentum rode in favor of the Lady Rams in what they hoped would be the last set, and they were right.

With errors and rallying going in the right direction, the Lady Rams took the third set win for the sweep.

As the season goes on, the Lady Rams have a few things that may need improvement, but it seems right now, things are going right for the team.

We can hope that after a year of no volleyball that the team is well rested and ready to face each opponent and seal wins throughout the season.

The Lady Rams will be back at home against Calipatria, Thursday Aug. 19, scheduled for 5 p.m., after the JV game.