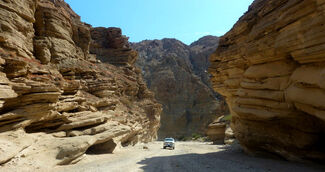 Photos Courtesy of California Department of Fish and Wildlife

In the middle of a hot and very dry summer, three agencies came together in the scorching mountains between San Diego and Palm Springs to provide water to the endangered Peninsular bighorn sheep population.

It was 102 degrees when Janene Colby (CDFW), Michael Puzzo (California State Parks) and Scott Gibson (Society for the Conservation of Bighorn Sheep) began the process of delivering 300 gallons of water to a large tank in the Anza-Borrego Desert State Park.

By 2 p.m., when they were finished setting up the water system, it was 115 degrees. But according to Colby, a bighorn sheep biologist, the work was necessary due to the state's serious Drought and lack of recent rainfall. There simply isn't a water supply anymore for the several dozen sheep living in that region. State Parks staff will monitor the temporary guzzler and replenish the water supply when necessary. Remote cameras have been set up to capture images of the sheep taking advantage of the water.

– California Department of Fish and Wildlife