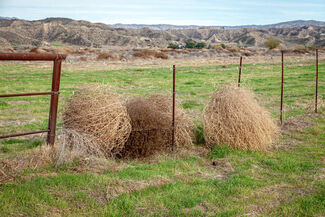 Tumbleweeds blown against a fence

You always knew "there's gonna be a gunfight" when a tumbleweed rolled down the dusty main street of Tombstone, Dodge City, or Deadwood.

That thought crossed my mind as I turned onto S-22 and what seemed like a giant bowling ball began rolling directly towards me along the highway.

Perhaps five feet in diameter, this was one of the larger tumbleweeds I had ever seen.

Despite being a non-native, invasive plant, the Russian Thistle, or tumbleweed is now well established and has woven its way deeply into the lore of the old west.

While not a plant you find on the desert floor around here, the tumbleweed is common to San Diego backcountry areas, growing in disturbed soil such as fallow agricultural fields, grazing lands, and highway shoulders. Its tolerance for bad soil and salt allows it to grow in areas where many other plants will not.

The tumbleweed was first documented in this country in 1877 in South Dakota, apparently brought in by Ukrainian farmers. By 1900, it had spread west to California.

The prickly plants begin as a bright green shrub with grass-like shoots. Small green flowers grow at the branches. At this stage, deer, bighorn sheep and mice feed on it.

The tumbleweed gets its name after it dies and dries out. The brittle skeleton breaks off from the roots when there is enough wind and as the ball rolls it disperses seeds.

Each tumbleweed produced up to a quarter million seeds that will embed into the ground and germinate when moisture and temperatures reach required levels.

For the rest of my drive, I couldn't get the iconic old western tune, "Drifting Along with the Tumbling Tumbleweeds," out of my head.