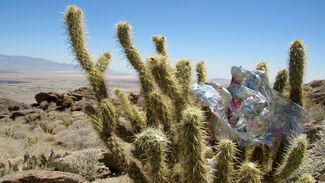 You don't have to spend much time wandering around the desert to know that it has become a dumping ground for mylar balloons dropping from the sky.

It's one of those things that everyone knows is a problem, but until now, no one has done anything about it.

Along comes Sicco Rood, a Borrego resident and research associate at the Steele/Burnand Desert Research Center.

After seeing and collecting hundreds of balloons that have drifted into the desert after being released in urban areas to the west, Rood has launched a petition drive asking Governor Gavin Newsom, San Diego Mayor Todd Gloria, and the San Diego County Board of Supervisors to ban the environmentally unfriendly balloons. He is hoping to get thousands of signatures.

While the festive balloons might bring a few moments of joy to recipients, they can cause lasting environmental and wildlife damage, not to mention the unsightly litter in pristine wilderness areas of Anza-Borrego Desert State Park.

"I see them every single week when out doing my field work or hiking and I pick them up," Rood said. He has seen clusters of a dozen or more falling to the desert and it's not uncommon for him to return from a hike with nearly a dozen balloons he has collected.

The mylar balloons will become tangled in cactus or ocotillo and eventually break down into microplastic that can be harmful to wildlife. Additionally, the helium used to inflate the balloon is a limited and non-renewable resource important for medical scientific equipment. In addition to the litter, the plastic balloons are covered with a metallic coating that will short out power lines, causing service outages and wildfires from sparking electrical lines.

Local utility companies have reported more than 500 outages in the past five years from party balloons, and SDG&E has a campaign asking customers to not release them. They offer several tips, which include keeping balloons inside or attaching weights if outside to keep them from flying away. Once the party is over, SDG&E suggests puncturing the balloons in several places and leaving the weight attached until all the helium escapes.

"This does not have to be this way. Air filled balloons on sticks or other alternatives can do the same job of making events more festive without floating up into power lines or into the desert and ocean," according to a Change.org website promoting the ban on mylar balloons.

While Rood is most focused on the impacts of mylar balloons in the desert, he acknowledges that they can also drift into the forests and oceans where marine wildlife can be killed when they mistake the colorful balloons for food.

His signature effort has just started, but at press time, more than 500 people had already added their names to petitions.

Information about the petition drive is available on Rood's Facebook page, or by visiting https://www.change.org/banmylarballoons.