Julian's 4th of July Parade: Back & Better Than Ever 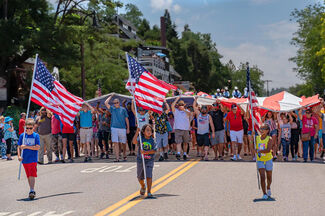 Volunteers carry the huge traditional United States flag down the parade route on Main Street during the Fourth of July Parade in Julian.

Julian's 4th of July parade made a fantastic comeback this year celebrating Julian's 150 anniversary plus one. The theme was a nod to the town's sesquicentennial last year and the fact that the parade had been cancelled. With limited time to prepare and fundraise, the Julian 4th of July Parade Committee knew that they were up against a number of obstacles.

For the first couple of months planning the parade, those involved quickly began to scale back the budget and considered making cuts wherever necessary with the available funds. However, the Julian community was extremely generous and their support allowed the committee to provide one of the best parades ever.

The 2021 parade Grand Marshal was Marion Moore. Moore is known for her many years of tireless volunteerism in the Julian community. Not only has she served on the Julian 4th of July Parade Committee, she also worked with the Julian Historical Society and was instrumental in forming the Friends of the Julian Library. Moore rode in The Punkin Project's steampunk pumpkin carriage along with some of her family members and friends. The Committee is very grateful for her involvement over the years.

The crowd was moved by their performances and skills and they definitely added to the small town patriotic feeling for the day. The Marine Band was presented with the Golden Nugget award.

This year's parade received a record number of entrants which topped out at about 65. The parade was filled with several local organizations, musicians, vintage vehicles and more.

The following received awards for their entries:

The Julian 4th of July Parade Committee would like to thank everyone who donated and/or supported the parade. Each year the Committee works hard for several months to plan and organize the event.

This year's parade was remarkably special due to the overwhelming support it received. Seeing the delight on the faces of those who attended made it all worthwhile. The Committee is looking forward to seeing you next year!