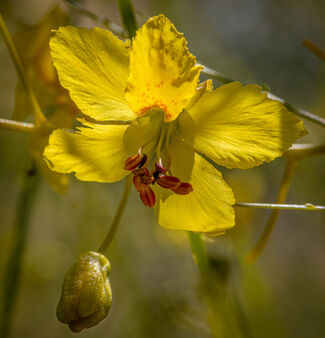 There's a remote desert wash named for this tree, a couple of them provide shade at the Anza-Borrego Desert State Park Visitor Center, and there's even plans for a local festival featuring this tree.

We are talking about the blue palo verde, a large native desert tree that has also become increasingly popular as a landscape centerpiece. An obvious reason for the popularity is their tolerance to Drought. They are also fast growing when watered in a garden environment.

Distinctive because of its beautiful green trunk and glorious each spring with a cloak of bright yellow flowers, it's not surprising that this is such a popular plant.

In Spanish, palo verde means green wood or stick, and this distinctive coloration is a result of high levels of chlorophyll in the bark.

This allows the tree to photosynthesize or grow during summer heat when leaves and even branches are dropped during periods of Drought.

The large desert tree is also a food source for bighorn sheep, mule deer and jackrabbits as well as other small critters. Several species of birds also depend on palo verde for perching and as a source of food and both hummingbirds and verdin nest in protective clusters of branches.

Despite the harsh environment where these trees grow, they can live for a century or more, with some estimated at more than 400 years old.

Seeds of the palo verde are like mesquite pods, and were gathered, ground and eaten by native people. The colorful flowers are also edible, often added to salads.

Remember, you can gather seeds and flowers from trees growing on private property, but this is not allowed within Anza-Borrego Desert State Park.

In the wild, beautiful examples of the palo verde can be found in Palo Verde Wash that crosses Highway S-2 east of Borrego.

In town, mature palo verde provide welcome shade over the picnic tables at the park visitor center and are clustered in the new County Park. Additionally, there are palo verde in the Anza-Borrego Desert Natural History Association's Desert Garden and part of the Mall landscaping.

The Palo Verde Festival is now in the planning stage for April 2022.