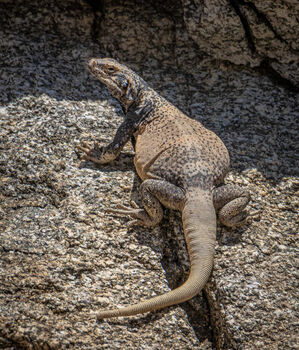 Borrego is moving into that time of the year when fewer tourists are spotted wandering about. But there is one character more frequently seen as seasonal temperatures climb into triple digits.

That character is the common chuckwalla, a large, stocky, ominous looking lizard often seen sunning itself on rocky hillsides.

While the chuckwalla is an imposing looking animal with loose skin, a thick tail and course scales, it's harmless to humans. In fact, they are non-aggressive, preferring to quickly dart into narrow cracks in boulders to escape danger and then puff up to wedge themselves into the rocks.

The chuckwalla feeds almost entirely on vegetation, including leaves, fruit, seeds, and flowers. Occasionally they will snatch up a tasty insect. The chuckwalla also seems to be somewhat selective, preferring yellow flowers, likely because of the abundance of brittlebush common in the rocky hillsides where it lives.

While there are several species of chuckwallas, the only species found here is the common chuckwalla, measuring around 15 inches in length. Males are generally larger than females.

Chuckwalla coloration can range from nearly black, to weathered dark gray with patches of dull yellow. These are heat loving lizards and one of the reasons you will see them basking in warm sunshine. They depend on outside heat sources to maintain their body temperature.

They hibernate in cooler winter months, but as temperatures begin to rise, they will often sun themselves until reaching an optimum body temperature of around 105 degrees. Unlike many desert animals that hide away during the hottest times, the chuckwalla is active during the day, even during summer heat. This is now mating season for chuckwalla who can lay more than a dozen eggs that hatch between June and August. These are long-lived animals with a life span of 25 years or more.

Keep an eye out as you drive down Montezuma Grade, or into Coyote Canyon where the keen eye may spot one of these local residents basking on boulders and enjoying the morning sun.