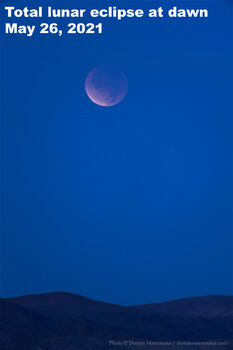 A lunar eclipse occurs when the full moon slips into the shadow of the Earth far out in space.

Early on the evening of Tuesday, May 25, watch as the sun sets behind the western horizon; then, face the opposite direction and you'll soon spot the moon rising in the east.

On that morning, sky watchers throughout most of North America will see the start of this eclipse (weather permitting), but depending on where you live, you may see only a portion of the sky show. In general, the farther west you live, the more of the eclipse you will see before the moon sets.

A lunar eclipse occurs when the full moon slips into the shadow of the Earth far out in space. This occurs every six months or so when the sun, moon and Earth are aligned. Sometimes, the moon only partly enters this shadow, and we see what's called a partial eclipse. Other times, it passes closer to the shadow's center, and we see the moon fully engulfed: a total lunar eclipse.

Such a sky show is remarkable to watch, but this one is no "normal" eclipse. Well, actually, it is, but if you believe what you read on the internet, it's unlike any other and will surely be life-altering. Not only will we experience a total eclipse of a full moon (it can't happen any other way!), but this full moon will lie within only hours of its perigee, its closest orbital point to Earth. This means that it will appear larger than normal. This occurs every month, of course, but when it happens around the time of a full moon, folks love calling it a "super moon." But this will not be just any old "super moon"; this will be the largest of the entire year!

Nothing "super" about it, really; the perigee moon appears only about 7% larger than the average full moon – about the size difference between a 15-inch pizza and a 16-inch pizza, and I doubt anyone would notice if they didn't know in advance.

And finally, there's the "blood moon", a ridiculous term that seems to have become quite popular in recent years, even though there is absolutely no such term in astronomy. We see this applied any time the moon takes on a reddish appearance – like whenever it's rising or setting – or during a total lunar eclipse.

OK, so there you have it. On the morning of May 26, we will experience a total eclipse of a full super blood moon. Next week, I'll tell you more about this upcoming sky show, the times it will occur and how to view it.