Why Is the Night Sky Dark? 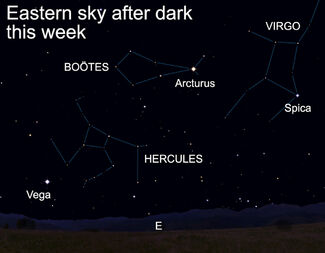 The apparent contradiction between what people see and what they believe in the night sky was first discussed in the 16th century but is now known as Olbers' paradox.

If you're out looking for the moon this week, you'll have a tough time finding it. On May 11, it lies nearly in the direction of the sun (its "new moon" phase), but by May 13, it will appear as a thin crescent low in the western sky at dusk.

Before the moon begins illuminating our night sky again this coming week, we stargazers have a chance to gaze skyward and ponder a very simple question: Why is the nighttime sky dark?

Now, before you exclaim, "Because the sun isn't up, you fool!" and think I'm experiencing yet another senior moment, let's think about this for a moment.

Yes, it's true that during the early evening, our part of planet Earth turns away from the sun (sunset, we call it) and without sunlight to illuminate our atmosphere, the sky appears dark. And that, you might think, is the end of the discussion. But if it were, this would be a very short article.

For ages, sky watchers and philosophers believed that the universe is infinite and therefore must contain an infinite number of stars. If true, they reasoned, then our sky should never become dark; it should always appear brilliant, no matter where we cast our gaze.

Think about it this way. Imagine the universe to be composed of similar stars that are evenly distributed on crystalline spheres surrounding us, much like layers of an onion. On the sphere nearest to us, stars would appear brightest. The layer twice as far would also contain stars, but each would appear four times fainter; those on the shell three times farther would appear nine times fainter, and so on out to infinity.

From this we might easily conclude that, because the most distant stars would appear so faint, we could never see them. But remember that with increasing shell sizes come more stars. So, while those on the sphere twice as distant appear four times fainter, there would also be four times as many of them. The shell three times farther would contain nine times as many, and so on.

In other words, each shell would contribute an equal amount of starlight to our sky, no matter how far away it lies. Wherever in the heavens you look, your gaze would encounter the light of a star, and the entire nighttime sky should appear as brilliant as the sun itself! But it doesn't. The night sky is dark.

This apparent contradiction between what people see and what they believe was first discussed in the 16th century but is now known as Olbers' paradox, named after Heinrich Olbers, who described it in 1823.

The explanation could be as simple as the universe not actually being infinite – and therefore not containing an infinite number of stars – or as profound as an infinite universe having an origin, with the light of the most distant stars not yet having time to reach us. A puzzler to be sure, and believe it or not, this paradox is still being pondered today.

Whatever the answer, go outdoors this week, and gaze skyward. You may just view the dark nighttime sky in an entirely new light!