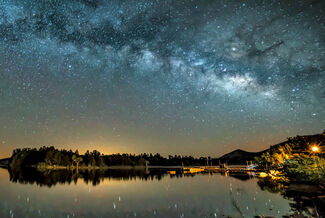 After a five-year effort by a coalition of amateur astronomers, local merchants, environmentalists, neighboring communities and the County of San Diego, Julian has been certified as an International Dark Sky Community.

Leaders of this effort received the exciting news last week from the International Dark Sky Association.

Julian became the 13th IDSC worldwide and the second in California, the other being Borrego Springs that helped with the certification process.

Local amateur astronomer Doug Sollosy operates Curiosity Peak Observatory at his home east of Julian and has long recognized the value of a place where people can come to see the wonders of a clear, dark sky, absent of light pollution.

He helped form the Julian Dark Sky Network in 2016 to share Julian's dark skis through astronomy.

Eventually, local Realtors, businesses, the Volcan Mountain Foundation, Julian Historical Society joined to support the effort and the Santa Ysabel Nature Center even installed a dark sky exhibit for visitors. Area wildlife groups, such as the Julian Wolf Center support efforts to reduce light pollution because of the negative impact it has on wildlife by altering sleep cycles if too severe.

Sollosy was almost giddy when he called to share the good news.

"This is such an exciting thing," Sollosy said. "It means people from nearby urban centers will continue to have a place they can come to enjoy the magnificence of the night sky."

As part of the certification process, the Julian Dark Sky Network worked closely with officials from surrounding San Diego County, California, to affect changes to the County's outdoor lighting ordinance. The results help pave the way for future communities in the County to become certified by IDA.

Both the Borrego Springs Sponsor Group, an advisory body to the County, and The Anza-Borrego Desert Natural History Association have supported and assisted the Julian effort.

Sollosy and his supporters worked to educate merchants about how they could install new lighting that would not only protect the night sky from light pollution, but would be more efficient and save energy costs.

"The dedication of the Julian Dark Sky Network to achieving today's outcome is significant for all of San Diego County," said IDA Executive Director Ruskin Hartley. "Apath forward to IDA accreditation has been opened for unincorporated cities and towns there as a result of the Network's efforts."

Enacting a quality outdoor lighting policy is at the heart of achieving International Dark Sky Community status. Since Julian is a non-self-governing town under California law, County action was required to make it eligible for IDA consideration.

Hartley went on to say that Julian's new status benefits the other International Dark Sky Community in California, including Borrego Springs.

"Like Julian, Borrego Springs is an unincorporated municipality whose lighting policy is now formally codified in the county law," Hartley said.

On the heels of the IDA news, the Julian Dark Sky Network now turns to further educating the community about the importance of preserving the natural resource of nighttime darkness.

Members hope that their work will inspire other communities, both in southern California and beyond, to follow their lead and take proactive steps to improve the nighttime environment in their territories.

"We are at a threshold point where we can decisively reverse decades of growing regional light pollution and see the emergence of a whole region of dark skyappreciation and preservation," Sollosy said.