The Herdsman and the Crown 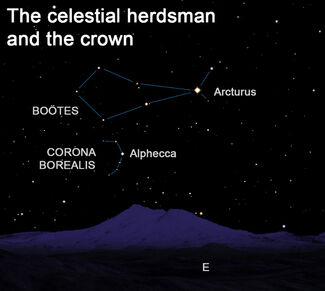 Corona Borealis is one of the smallest constellations in the heavens.

I always know that springtime has arrived by the stars I see during the early evening hours. One of my favorites is the small but quite beautiful constellation Corona Borealis, the Northern Crown.

The Northern Crown isn't one of the brighter star groupings, so you'd be better off searching for this one from a dark-sky location when there's no moon in the sky. You can find it easily by locating one brighter star first.

After dark this week, look midway up in the eastern sky and you'll see a glistening, yellowish-orange star named Arcturus. You can find it by following the "arc" of the Big Dipper's handle outward, away from its bowl. Arcturus is the fourth brightest star in the heavens and is also the most brilliant of all Northern Hemisphere stars.

Located near the constellations of Ursa Major and Ursa Minor (the Great and Little Bears), Arcturus is the main star of the constellation Bootes (pronounced bo-OH-teez), the Herdsman or Bear-Driver. It's named after the mythological herdsman who eternally shepherds the polar stars in their daily and annual revolutions around the North Celestial Pole.

The name Arcturus comes from the ancient Greek word Arktouros meaning "Bear Guard." It's a red giant star about 25 times larger and about 180 times more powerful than the sun. It is an example of our star's fate some 5 billion years from now and lies about 222 trillion miles, or 37 light-years, away.

Go ahead and search the area for a herdsman if you like, but anyone who has read my column over the years knows that I prefer to create my own images. To me, Bootes looks more like a horizontal kite, with Arcturus forming its base where a tail streams nicely off to the south.

Just below Bootes, you will see the tiny arc of stars that outlines Corona Borealis. One story tells that this ancient constellation symbolizes a jeweled crown or wreath worn by Ariadne, daughter of King Minos of Crete; another story claims it represents a braid of golden twine. Whatever the true story, Corona Borealis is one of the smallest constellations in the heavens, ranking 72 out of the 88 constellations.

The Crown's brightest star is named Alphecca, and it's eight times fainter than Arcturus. What's more, it's not actually a single star, as it appears to the eye, but two stars that form an "eclipsing binary" system. Even large telescopes can't distinguish the individual stars that make it up, but astronomers have learned quite a bit about it by studying how its weak stream of light brightens and dims over time.

For example, they have deduced that these two stars eclipse each other as they orbit a common center of gravity every 17.4 days. The brighter of the pair is a large white star with a temperature around 17,000 degrees Fahrenheit. Astronomers calculate that it is about 2.5 times larger, 50 times more luminous and three times more massive than our sun.

The fainter companion is a star more like the sun, perhaps a bit smaller and cooler, and it lies at a distance of about 40 million miles from the primary star.