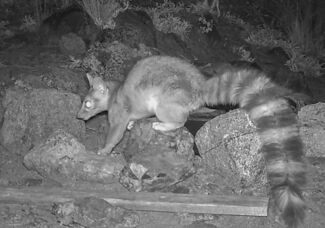 Just because you can't see it, doesn't mean it's not there.

It's an old lesson, but as night viewing wildlife cameras become more popular, it's something we are reminded of often.

I have met few people who have ever seen a ringtail, in fact if you start talking about this cat-like creature with the big eyes and ringed tail, you might be accused of the old snipe hunt trick. But they are real and even spotted recently near Borrego Springs by local resident Terry Hunefeld while investigating wood rat nests with the Anza-Borrego Tracking Team.

East of Yaqui well they encountered unfamiliar clusters of animal droppings, so a camera was set up in hopes of solving the mystery.

Images of seven animals were recorded, but the most interesting was a brief cameo by a ringtail.

There have been other reports of ringtails locally, including a family that lived in the stone house that sits at the back of Palm Canyon Campground.

The online program iNaturalist lists only 11 sightings in San Diego County, but several of those have been in the Anza-Borrego area.

There's good reason that few have ever seen a ringtail in the flesh.

They are secretive and elusive, but also somewhat curious and gentle. Some sightings have been a result of food being left out for pets or local wildlife.

At first, if you get a quick glimpse at night of the ringtail, you might mistake it for a fox.

They do have the face of a fox, large eyes and ears, a cat-like body, but also the distinctive large, black-and-white ringed tail.

They are relatives of the raccoon and are correctly called a ringtail, however frequently referred to as cats, likely from the Gold Rush era when they were kept as pets and also known as miner's cats.

You are not likely to see one during the day, but if you are out at night in rocky areas, you might spot one.

The photo with this story comes from Forest Service Lookouts Curt Waite and Dave Fleming who put out a game camera at the Los Pinos Lookout near Lake Morena.

Ringtails are omnivorous, feeding on just about anything they encounter, but preferring fruit, insects, lizards and snakes and the occasional small mouse or squirrel. They will also feed on small birds and their eggs.

Just one more fun neighbor that goes bump in the night.