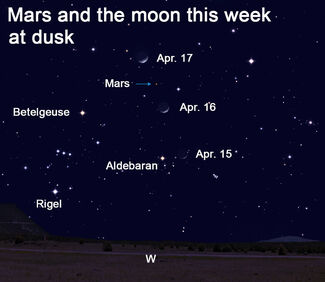 Studying Mars helps us see and understand our own planet from a new perspective.

If you haven't been paying attention to the Perseverance spacecraft that landed on Mars on Feb. 18, you've been missing one of the great scientific achievements of our time. Check out the real-time video of its landing on Mars – a view no human has ever seen until now – in the NASA YouTube video titled "Perseverance Rover's Descent and Touchdown on Mars."

If that's not enough to excite you, listen to the first audio recorded on Mars – the wind, the rover driving over soil and rocks, and more – on the official NASA website.

But the best is yet to come. On April 11, scientists will launch a rotorcraft (a helicopter!) that will achieve the first powered flight on another world. Quite appropriately, the Ingenuity rotorcraft contains a piece of the original Wright brothers airplane. This will be a game-changer in the exploration of the red planet.

As you enjoy these magnificent achievements and pretty pictures, you might be wondering why anyone should care.

The simple answer is that we are human. We are curious. We are explorers and adventurers. We are consumed with knowing what lies beyond the hills, beyond the seas, beyond our own world. It's this very curiosity that separates us from the other creatures of Earth and produces remarkable developments upon which our civilization, our lives and our worldviews are built.

But there's so much more than just curiosity. Studying Mars helps us see and understand our own planet from a new perspective. The technology and remarkably complex international teamwork to get all to work together as a single unit, and to land a craft on Mars, will aid in future robotic missions to Mars and other worlds. And where robots go, man is sure to follow.

Then there are the technological spinoffs from the research leading to this mission, something folks ignore as they use that very technology in their everyday lives – everything from material sciences to communications to camera technology to navigation to aerospace engineering to mapping to robotics to life sciences to chemistry to atmospheric sciences and hydrology. The list can continue for many pages.

And let's not forget the inspiration for our children – to dream beyond their everyday world of a future full of excitement and promise. How many of them will view themselves and our world differently because of missions like this? And how many will be inspired to enter the sciences and develop new technology and medicines or to make revolutionary discoveries? We may never know.

Now, there are those who argue that the $2.7 billion price tag for such work – a little more than $8 per U.S. citizen – could better be spent right here on Earth. Folks, we haven't filled a box with 2.7 billion dollar bills and shipped it to Mars! It's all being spent right here on Earth to employ researchers, engineers, contractors and subcontractors, secretaries, food-service workers, custodians, educators and many others to accomplish this grand feat and, perhaps more importantly, to lead to remarkable future developments.

Solving scientific mysteries, creating technological innovation, inspiring future generations, employing tens of thousands around the U.S. and the world – all for $8 per person. Now that, my friends, is an economic stimulus package!

Yes, there's more to such missions than just pretty pictures.