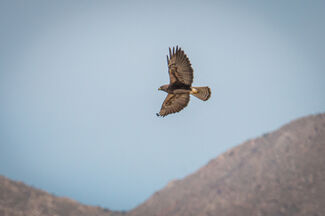 Borrego Hawkwatch 2021 may be heading for a near record number of migrating Swainson's Hawks passing through here, and no one predicted it.

The annual citizen-science project launched its 19th season on Feb. 21 amid predictions that this would be a sparse year for the migration due to the lack of wildflowers. Fewer wildflowers mean fewer large, green caterpillars that the birds depend on as a high energy source of protein.

"I don't expect much of a bloom this season so migration numbers will be on the low side. Hope I am wrong of course," Cohen said.

"At this point we are at the fourth best year with more than 5,400 birds counted," Cohen said. "This has been the best count we have had without caterpillars."

The peak count came during the Super Bloom of 2017 when 11,690 birds were observed. The fewest number of 1,086 were recorded in 2019, but that was inaccurate because an unusual number of birds passed through after the official count had ended.

Since the count could end as early as April 1, or continue until April 15, depending on available volunteers, Cohen said it is unlikely overall records will be broken.

Cohen has no answer as to why number are so high this year.

"It's likely weather related. There were all of those storms in Texas and the Midwest and maybe it just moved migrating birds to the west," he said.

For whatever reason, the count has been impressive, with a single-day count of 2,731 birds observed on March 13.

"The March migration produced more migrant hawks than expected. We have had a very dry year thus far, with less than two inches of rain, so insects have been virtually absent. We did have one day of aerial feeding, probably feeding on flying ants. We have had several days with high wind. On March 13, hawks were migrating before sunup," Cohen said.

For official Hawkwatch counters and bird lovers who come to see the morning launch; it has been impressive.

Volunteers are on the lookout in the evenings to note arriving birds so that there will be some idea of what to expect the next morning.

Volunteer observers are out every morning during the count at the official count site located 2.8 miles north of Palm Canyon Drive on DiGiorgio Road. Guests are welcome, but social distancing will be observed.

Cohen said he also needs additional volunteers to assist with morning counts and anyone interested can reach out to the Anza-Borrego Natural History Association for information or contact Cohen at raptorhal3@gmail.com.

In the mornings, hawks will launch from roosts and begin to form into flocks called kettles while they rise to catch favorable wind currents. The kettles have been called "bird tornados" because birds are circling as they climb into the sky.

Some kettles may include upwards of 500 or more birds. It's an impressive site.

The Swainson Hawk migration is one of the longest animal migrations on the planet, with some birds covering more than 6,000 miles from South America to the northern slopes of Alaska.

Cohen began the annual Hawkwatch after it was recognized the Borrego Springs was on the migratory route for the birds.