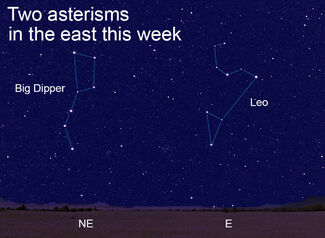 I suggest that stargazers ignore the classical constellation figures and create their own figures.

I recall many years ago standing under the stars trying to figure out why the starry heavens looked nothing like the elaborate drawings I'd seen in star maps and books.

Why could I never find a bear among the stars of Ursa Major, or a lion where Leo was in the sky? Were the ancients that much more perceptive or imaginative than I?

The answer, of course, is they weren't. No one in the ancient world ever saw these pictures either, though I understand opium usage was fairly common back then! No, they simply marked regions of the sky to represent people, animals and objects that were important in their storytelling.

It took many years for me to realize that the constellations look no more like their namesakes than the George Washington Bridge looks like the father of our country!

Today, I occasionally hear from frustrated stargazers who plead with me to show them the celestial imagery created by the ancients. Of course, if they did see those pictures up there, they'd need far more help than I could offer, so I suggest instead that they ignore the classical figures and create their own figures.

"Can I do that?" they ask, as if the constellation police will descend upon them for abusing the sacred imagery passed down through the ages. "Why not!" I reply. "There are no rules when it comes to finding your way around the sky." In fact, modern astronomers create such helpful figures all the time; we call them "asterisms," groups of stars that actually look like something.

After dark this week, go outdoors and look toward the eastern sky for a couple of prominent asterisms. These work for me but, remember, you may recognize completely different shapes among the same stars. And that's perfectly OK.

Most folks quickly notice the Big Dipper, standing on its handle midway up in the northeastern sky. This group of seven stars is part of the constellation Ursa Major, the great bear, but to North Americans, these trace out a more familiar image: a bowl with a bent handle. That makes the Big Dipper an asterism.

Now if we could fill the Dipper's bowl with water and cut a hole in its base, the water would drip onto the back of Leo. I admit that it's not easy to find a lion there, so look instead for a backward question mark, with the bright star Regulus forming the dot at its base. This asterism is said to form the head of the lion while another asterism, a triangle of stars at the other end, forms the lion's, well, other end.

If you have no luck conjuring up an image of a lion, try turning it around. That backward question mark now traces a long, curving tail, and the triangle forms the head and pointy nose of a mouse! Much easier to see, wouldn't you say?

Now if you still insist on searching for classical images among the stars, go right ahead. You won't hurt my feelings. But if you're like I am, and I'm guessing you are, you'll make things easier by just creating your own!