Seeing the Sun at Night (Well, Sort Of) 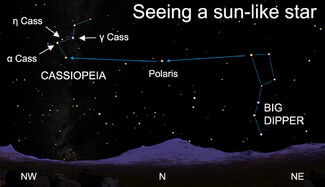 All stars are thermonuclear furnaces.

Stars are not all alike. If they were, we could determine their relative distances just from how bright they appear.

They do share one important similarity, however: Each is a thermonuclear furnace. In most cases, the cores of the stars are packed with hydrogen atoms that, under unimaginably high temperatures and pressures, slam into one another and fuse to create helium atoms. In this process, they release a tremendous amount of energy – some of which prevents the star from collapsing upon itself, and some of which pours outward as light and heat.

Just like the stars we see at night, our brilliant sun is a thermonuclear furnace, but that's where the similarity ends. The sun is our closest star and lies about 93 million miles from us; that's why it appears large and bright. But imagine how its appearance would change if we could drag it farther away. As it recedes, it would appear smaller and dimmer, and smaller and dimmer until eventually, it would look as tiny and faint as the other stars of the nighttime sky.

Just how far would that be? The answer is many trillions of miles.

Suppose you wanted to see how the sun would appear against the other stars of our night sky? Well, you can't, of course, but you can see a star similar to the sun. Its name is Eta Cassiopeiae, and it lies within the W-shaped star grouping now high in the northwestern sky after dark. Once the moon becomes too bright later this week, you may have a tough time spotting it.

Eta Cass, as astronomers affectionately know it, lies a mere 114 trillion miles – or about 19.4 light-years – from us. Considering that our Milky Way Galaxy spans at least 100,000 light-years, this is a very close neighbor indeed. If it were much farther, we could never see it with the unaided eye. So why is it so faint compared to most of the other stars in our night sky? The fact is they're either larger or more luminous (or both) than our sun.

Take, for example, the two stars closest to Eta in Cassiopeia. Schedar (aka Alpha Cass), to its lower left, is almost 42 times larger and 676 times more luminous than our sun. That means we can see it at a distance of some 1,400 trillion miles (228 light-years).

And what about Gamma Cass, to the upper right of Eta Cass? This star has a diameter about 10 times greater and luminosity more than 34,000 times that of our sun, and it makes it visible at a distance of 3,300 trillion miles, or 550 light-years.

Nearly all the stars we see at night are larger and more luminous than our sun. That doesn't mean that sunlike stars are rare; there are plenty! But much like looking around a sandy beach, we easily see the largest rocks and boulders strewn about, not the millions of tiny grains of sand that make up the beach.

So the next time you gaze skyward on a clear dark night and marvel at all the "suns" you see, think about all those you can't see!