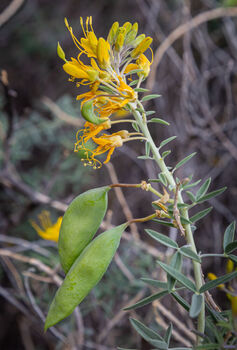 It was the large, green seed pods that first caught my eye.

Dangling from a small bush with clusters of happy yellow flowers, I was curious about this plant and the large seed pods I had not often seen in Anza-Borrego Desert State Park.

What I had come upon in a sandy wash north of Borrego Springs was a perennial shrub known as bladderpod, obviously named because of the large seed pods.

This native plant is common to Southern California, Baja California and northwestern Mexico. It's fast growing and reach as size of about six feet in height.

In San Diego County it is more common in our coastal areas, almost non-existent in inland areas and mountains, and scattered in local desert area such as Palm Canyon, Hell Hole Canyon, Coyote Canyon, San Felipe Creek and Grapevine Canyon.

Bladderpod, also known as burro fat, stinkweed or California cleome, was an important plant for early Native American residents who considered it nutritious and tasty.

The stinkweed name comes from the fact that it emits an unpleasant odor designed to discourage insects and animals from feeding on it.

While the seeds from the large pods were eaten, it was the bright yellow flowers preferred by the Kumeyaay as a fresh vegetable. Since bladderpod blooms throughout the year, it provides a reliable source of food.

Preparing the flower to eat is a long process, requiring harvesting of the blossoms followed by hours of boiling and frequent changes of water to remove the bitterness.

The rendered flowers are then drained and pressed and eaten plain of with the addition of onions, peppers and tomatoes.

Desert travelers are reminded that all plants in the park are protected, so gathering is not permitted.

The long blooming season, attractive flowers, bird and insect-friendly nature of the bladderpod has also made it an attractive home garden plant, available at native plant nurseries.

The plant is Drought tolerant, adapts to a wide variety of soil types, and is ideal as a slope stabilizer.