How Far South Can You See? 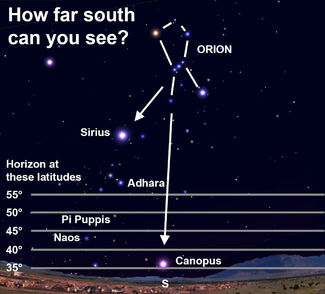 Our knowledge of a round Earth goes all the way back to about 240 B.C.

This week I spotted the star Canopus for the first time since last winter, and I was reminded of an interesting fact. Quite a few folks still believe the Earth is flat.

Hard to believe, I know. Many of these people belong to the Flat Earth Society, a group which describes itself as "a place for free thinkers and the intellectual exchange of ideas" – as long as those ideas don't involve any actual science or common sense, I suppose.

Despite their claims, our knowledge of a round Earth is not new. It goes all the way back to about 240 B.C., when the mathematician Eratosthenes noticed that, on the summer solstice, shadow lengths were different in Alexandria and Syene in Egypt. From the length of these shadows, he used geometry to show that the Earth was spherical, and he even calculated its circumference to within only a few percentage points of its actual value. Not too bad for a guy using sticks in the ground!

How these modern flat-Earth "free thinkers" have managed to escape exposure to scientific advances of the past two millennia, I'll never know. Perhaps they think that these are all hoaxes perpetrated by "the guvment." I wish I had an explanation.

Even before the time of Eratosthenes, the philosopher Aristotle offered observational evidence to support the round-Earth idea. He learned that sailors traveling far to the south reported seeing stars that were below the southern horizon of Greece, and he quickly understood that this could happen only if the world on which they traveled was a sphere.

He suggested a common-sense technique that we can still use today; I've done it, and I can tell you it works. A great place to start is the constellation Orion, high in the southern sky during wintertime.

Orion represents a great hunter, with its vertical rectangle of bright stars marking his shoulders and knees, and the three equally bright stars in a straight line forming his belt.

This star grouping lies directly over the Earth's equator and can be seen from everywhere on the planet. This means that, if we were to stand on the equator and look skyward, Orion would pass directly overhead; from the North Pole, Orion's southernmost stars would lie below the southern horizon. And from viewpoints in between, Orion would appear at different heights above our southern horizon.

South of Orion, we can easily see the dazzling star Sirius – the most brilliant of the nighttime sky. Even farther south lies another bright star, Canopus, but only those who live or travel below 37 degrees north latitude can see it. The farther south you go, the higher it will appear in the sky. By the time you reach the southern tip of South America, you'd find Canopus straight overhead!

In other words, as we travel north or south around our planet's curvature, we see the positions of familiar stars change in our sky, eventually revealing a whole new hemisphere of stars. This can happen only because our world is not flat, but spherical.

And despite what some might choose to believe, this is something we've known for over two millennia!