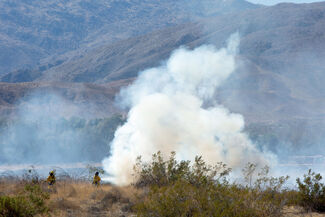 Just after 11 a.m. on Feb. 4, units responded to a vegetation fire near the intersection of Borrego Springs Road and Big Horn Road.

A resident was first on the scene and called the Borrego Springs Fire Protection District, who responded immediately, arriving in less than five minutes with four trucks and firefighters.

At 11:25 a.m., E91 reported the fire was at five acres with a high rate of spread. Shortly after, the rate of spread was updated to slow to moderate, with winds out of the south-southwest at five mph. And acreage was revised to two acres.

Crews remained on the scene to douse the area in case of continued sparks.

There were no reports of structural property damage or injuries.

The cause of the fire is still under investigation.