Hare-y Tales of the Winter Sky 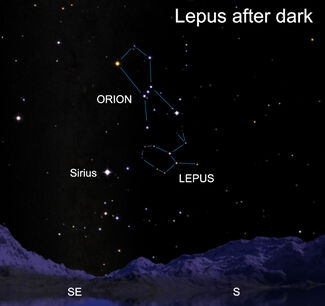 One of the more obscure constellations that Northern Hemisphere stargazers can see during winter months is Lepus, the hare.

If you haven't been out to enjoy a dark night sky this winter, you'll be happy to learn that few activities can keep you more socially distanced than stargazing.

The stars are so brilliant right now not because of the frosty night air (a myth that many believe) but because, at this time of year, we on Earth are looking outward toward some of the brightest and nearest stars visible along our annual journey around the sun.

Even beginning sky watchers can trace the brightest stars of the early evening sky into one of the largest and most easily found star groupings: Orion, the hunter. Orion now stands midway up in the southern sky after dark and is joined by the dazzling "dog star" star Sirius not far below.

With such a sparkling stellar display to admire, it's easy to forget about some of the tiniest and faintest celestial groupings, but this is a good time to search for them, too. One of the more obscure constellations that Northern Hemisphere stargazers can see during winter months is Lepus, the hare. We can find it south of Orion and just west of brilliant Sirius.

Lepus is a faint and ancient constellation and, like so many others in our sky, its true origins are lost in time, but some fascinating tales have been passed down through the ages.

One tells that Lepus may be connected to the legend of the Easter Bunny. It is said that when Ostara, the Anglo-Saxon goddess of spring, transformed a bird into a hare, she took away its ability to fly but, in return, gave it great speed and, once a year, allowed it to lay eggs.

Another such yarn tells that Lepus was commonly believed to be the prey of Orion, but I have to wonder why such a formidable hunter – accompanied by two great hunting dogs (Canis Major and Canis Minor) and with a great celestial bull (Taurus) in front of him – would bother chasing a measly rabbit, unless, of course, the hunter is Elmer Fudd!

Perhaps more intriguing is the story that, in ancient times, there were no hares on the Greek island of Leros. A young boy of that city returned from abroad with a pregnant female hare and took wonderful care of it until it gave birth. Soon, townspeople became quite interested in raising hares themselves.

As you can imagine, it wasn't long before hares completely overran the island. Hoping to combat the situation, their owners stopped feeding them, but it was too late. Soon the hares attacked the crops and consumed everything in sight. With the inhabitants of Leros now facing a true calamity, they banded together and eventually drove the hares from the island.

It was after this near disaster that the gods place a hare among the stars – so the story goes – to remind people that nothing in life is so desirable that it doesn't bring greater pain than pleasure afterward.

Whether or not you accept the story's message, the constellation Lepus is there to this day for all to see, so head outdoors on the next clear night to check it out!