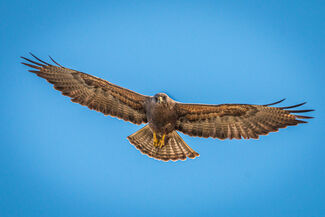 Despite the impacts of COVID-19 that has prevented some key participants from traveling to Borrego Springs for the season, organizer Hal Cohen said the count will proceed as it has for the past 18 years.

Anyone interested in participating in the morning count or afternoon observation of birds coming into roost can contact Cohen at raptorhal3@gmail.com.

Volunteers gather daily through the end of March to count the number of migrating hawks seen as they lift off from overnight roosting locations.

Additionally, a smaller group of observers are out in the evenings to see where arriving birds are landing for the night. This gives counters a better idea of where to look the next morning.

The annual hawk count began after it was recognized that Borrego Springs was on the path of the Swainson's hawks as they make a 6,000-mile journey from South America to the northern reaches of North America.

The availability of food for the hawks makes this an important way station where they can feed and recharge before continuing their northerly migration.

One of the hawk's favorite food sources are the large, green caterpillars that arrive along with the annual wildflower show. Hawk numbers have always been higher in years with a strong wildflower bloom, because that means more caterpillars.

Hawk numbers could be lower this year.

"I don't expect much of a bloom this season so migration numbers will be on the low side. Hope I am wrong of course, Cohen said.

The annual Hawkwatch is not just birdwatching.

Huge numbers of nature lovers also flock to the valley for the chance to see as many as 500 or more birds launching and forming into flocks known as kettles before catching a wind current that will carry then north.

The kettles have been described as "bird tornados," because the gathering hawks are circling as they gain elevation.

This unique behavior is an energy saving technique adopted by the birds to help them survive their rigorous journey.

Birds launch from their roosts by spreading their wings and waiting for warming air rising for the desert to lift them into the sky as they circle and climb. It's a spectacular sight.

That low count number happened in 2019, but it's not the whole story.

"We were hoping for a bumper count in 2019, but it didn't happen on schedule," Cohen said.

Large numbers of migrating hawks showed up after the 2019 count had officially ended. Several hundred showed up in early April along with an additional 8,000 during the month. Those numbers were not reflected in the official count.

It was all a timing issue.

However, the hawks know, their migration was delayed by the timing of the 2019 flower bloom that also produced millions of caterpillars throughout Southern California and Mexico.

Volunteers will be out between 8 and 11 a.m. each morning during the count period. The official count site is located 2.8 miles north of Palm Canyon Drive on Di Giorgio Road. Guests are welcome, but social distancing will be observed.