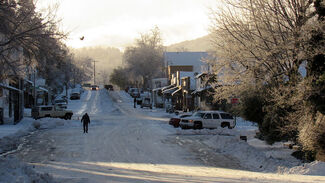 The San Diego mountains received a large amount of rain and snow over the course of a couple of days. Not one, but two storms, made its way through the county with a third one on its way. The mix of rain, hail, snow and strong winds created havoc on the roads leading to the mountain communities.

The San Diego County Sheriff's Department, CalTrans and news stations warned and provided tips to those hoping to travel to the mountain areas. However, the allure of the beauty a snow storm brings is often too tempting to avoid. Some visitors were unprepared to handle the driving conditions which meant overturned vehicles, crashes and blocked roads.

CAL Fire and California Highway Patrol were kept busy with rescues, advising drivers and snow chain control. At times, the highways leading to Julian were closed and drivers were required to carry snow chains.

The first snow of the season that fell shortly after Christmas was mostly in Mount Laguna with some Julian neighborhoods at high elevations receiving a good amount as well. However, these two recent storms brought snow to even lower elevations, as well.

The National Weather Service reported that Julian had received seven inches of snow from the storms and many residents saw a lot more. Residents in some parts of Julian will be snowed in for days since most residential areas are not snow plowed.

Even a hint of snow brings a lot of visitors to Julian and many businesses are grateful for the added business. However, the enormous amount of traffic, trespassing visitors and added trash disrupts the mountain area.

Julian is a small community with a single main shopping and restaurant area and three roads leading into the town. The pandemic has left many with the need to escape from their homes. With driving conditions already being difficult due to ice and snow, traffic in and around Julian can be a huge problem.

During these snow events, lines of vehicles going through town create backups for miles and can last for hours. For those who are lucky enough to make it into town and find parking, lines stretch to the corners for each of the pie companies.

Finding areas to enjoy the snow also poses a problem since most of Julian and outlying areas are privately owned. Visitors tend to park along the highways which can be very dangerous.

The Julian community graciously invites visitors throughout the entire year to enjoy all that it has to offer. When it's the weather that draws the visitors, the people of Julian only hope that everyone enjoys the area and is respectful of the residents and the land.

Hopefully, as the winter season goes on, there will be more opportunities for people to safely visit Julian during the beautiful winter weather.