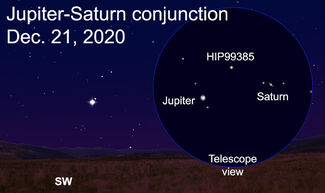 On the evening of Dec. 21, stargazers looking low toward the southwestern sky during twilight will see the giant planets Jupiter and Saturn appear to merge into one.

If you've got a small backyard telescope, this is the time to set it up, because next week, you'll witness something you may never witness again. On the evening of Dec. 21, stargazers looking low toward the southwestern sky during twilight will see the giant planets Jupiter and Saturn appear to merge into one.

Keep an eye on these two planets over the next few days and you will be able to watch as their orbital motion (combined with that of the Earth) carries them closer and closer in the sky.

Beginning on Dec. 16, the two will appear closer than the width of the full moon and will appear as a double planet. On the 21st, Jupiter and Saturn will approach to just one-fifth of the diameter of the full moon, and fainter Saturn might become lost in the glare of brilliant Jupiter, creating an illusion of them merging.

Such "conjunctions" between these two planets aren't that rare; they occur about every two decades. What is rare is how close they will appear next week. The last time Jupiter and Saturn approached more closely than this was on March 4, 1226. No one viewed that remarkable conjunction with a telescope, since the instrument didn't come into existence until the end of the 16th century.

In ancient times, sky watchers thought of the planets as gods, or at least messengers of the gods. Astrologers believed that when these "wandering stars" appeared to meet in the sky, it meant that they were discussing important events to take place on Earth. Many historians suspect that it was just such a planetary conjunction that may have formed the Star of Bethlehem. To learn more about this, visit en.wikipedia.org/wiki/Star_of_Bethlehem#Astronomical_object.

Today, of course, we know the planets as worlds that orbit the sun. Jupiter, for example, is a gaseous orb 11 times the diameter of the Earth, while the spectacular rings of Saturn would nearly fill the space between the Earth and its moon.

Over the next few days, check out this pair with binoculars as the two planets seem to become closer. For a truly spectacular sight, however, aim a small telescope in their direction. Start with a low magnification eyepiece, and if the view is good, increase the power a bit more. You will see not only Jupiter and Saturn but also a few of their moons.

Though these worlds will appear close together because they lie along the same line of sight, they're really quite far apart. On the night of Dec. 21, Jupiter will lie 551.1 million miles from Earth, and Saturn nearly twice as far: 1.0 billion miles. The faint star that appears between them in the telescope field – HIP99385 – is 300 trillion miles (51 light-years) away.

Let's hope the weather cooperates that evening because if we miss this conjunction of Jupiter and Saturn, we'll have quite a wait for the next one. These two planets will continue their orbits around the sun, of course, but the next time they will approach this close to each other won't occur until March 15, 2080. After that, it won't happen again until after the 25th century!