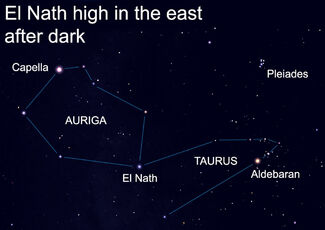 In the current evening sky, there's one star that officially belongs to two separate constellations.

Astronomers have divided the heavens into 88 such areas, some large and some small. And as you might expect, each star we see is part of its own constellation.

In the current evening sky, there's one star that officially belongs to two separate constellations – a "linking" star, we call it – and you can see it if you gaze midway up in the eastern sky just after dark.

You'll have little trouble spotting the brightest star in this celestial region. Capella sparkles like a jewel and marks the northwestern most vertex of a nearly pentagon shape of fairly bright stars called Auriga.

Through the ages, Capella has played a major role in mythological writings and was described in Assyrian tablets as far back as 1,730 B.C. The ancient Greeks often depicted Auriga as a charioteer with a whip in one hand and a goat and her kids in the other. Sky watchers of ancient China imagined its stars to represent the "Five Chariots."

To the south of Auriga, stargazers with a vivid imagination might be able to trace the stars of Taurus that outline the form of a bull's head and its long, pointed horns. Look for the bright reddish-orange star Aldebaran that represents the "fiery red eye" of the bull staring angrily at Orion. Surrounding it you'll notice a V-shaped grouping of stars called the Hyades.

In the lore of the ancients – from Greece to China – the Hyades itself had always been associated with wet and stormy weather; in fact, its very name is said to come from an archaic Greek word meaning "to rain."

And riding on the back of the bull we can find the shimmering star cluster known as the Pleiades or, more commonly, the "Seven Sisters." On a moonless night, look carefully at the Pleiades to see how many stars you can count. Most stargazers can find six, while some sharp-eyed observers claim to have seen as many as 16!

Interestingly, the star between Auriga and Taurus – known as Elnath – is one of only two stars that are shared with a neighboring constellation (the other is Alpheratz, sharing Pegasus and Andromeda). Ancient Arabian astronomers saw this star as part of Auriga, the charioteer, and called it the "Heel of the Rein Holder" but later officially assigned it to the tip of the bull's long northernmost horn. In this new position, Elnath derived its name from the Arabic "Al Natih," which means, in English, "the butting one."

Elnath is the second brightest star in both Taurus and Auriga, and the 25th brightest star in the heavens. It is located near the anti-center of the Milky Way Galaxy – the point directly opposite the galactic center, which lies in Sagittarius. At a distance of some 130 light-years, this star is nearly five times larger, and almost 700 times more luminous, than our sun

Bundle up this week, and head outdoors to check out one of only two "linking" stars in the sky!