Veterans Day Observance at The Circle 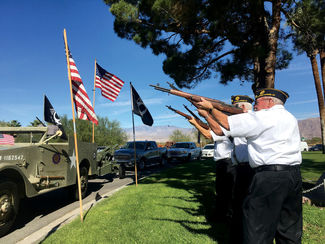 Each year, our local American Legion Post #853 pays tribute to our veterans by holding a Veterans Day observance at Christmas Circle on Nov. 11, in keeping with the "eleventh month, eleventh day, eleventh hour" tradition.

According to U.S. Department of Veterans Affairs website: "World War I officially ended when the Treaty of Versailles was signed on June 28, 1919. However, fighting ceased seven months earlier when an armistice, or temporary cessation of hostilities, between the Allied nations and Germany went into effect on the eleventh hour of the eleventh day of the eleventh month. For that reason, November 11, 1918, is generally regarded as the end of 'the war to end all wars.'"

This is why Nov. 11 was originally known as "Armistice Day." In 1954, Dwight D. Eisenhower officially changed the name to "Veterans Day" and while Memorial Day is a day of remembrance for those who have lost their lives in service, Veterans Day is a day to recognize the living veterans who served our country honorably.

The observance at Christmas Circle began when the scout car, driven by Bob Scribner, made its way down Palm Canyon Drive and parked at the Circle. At that time, Legion Post Chaplain Larry Hofer lead the attendees in prayer acknowledging the "brave and loyal men and women who have steadfastly served in their chosen branch of our military to proudly stand and defend our beloved country."

Richard S. Dobbins III, Commander of the Post, then called the Honor Guard to attention and they fired the traditional 21-gun salute.

"We are here to remember all those wonderful Americans, men and women who have gone before us in the service of our country," Commander Dobbins said. "Now is the time to honor them and aspire to replicate what they have done and keep that spirit alive."

To conclude the ceremony, Tim Kight played a heartfelt rendition of "Taps." When asked about the importance of recognizing Veterans Day, Tim remarked, "We need to remember our history because if we don't, we will repeat it. It's important to recognize the people that actually went out there. I lost a lot of good friends and they came home in boxes and I don't want anybody to have to do that again."

With that in mind, let's always remember to thank a Vet for their service, not just on Veterans Day. Their unwavering sense of duty and sacrifice has given us the gift of a free and democratic society.