Seeing the Inner Planets at Dawn 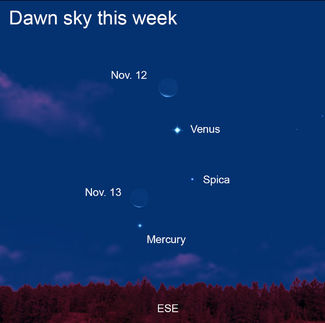 Even under the most ideal conditions, we can never see Mercury more than 28 degrees from the sun, which means it can never appear in a completely dark sky.

In Roman times, it was known as the god of commerce, travel and thievery. The Greeks called it Hermes, the messenger of the gods, when it appeared at dusk, and they called it Apollo when they saw it at dawn.

Today, we know it as Mercury – the nearest planet to the sun – and this elusive planet is back in our dawn sky this week for all to enjoy.

I call Mercury "elusive" because it whips around the sun in only 88 days, and as a result, it never stays in our sky for long and never strays far from the sun's glare. Even under the most ideal conditions, we can never see Mercury more than 28 degrees from the sun, which means it can never appear in a completely dark sky.

This week, however, you can find the planet as long as clear weather extends all the way to the eastern horizon during morning twilight.

At what many believe to be an ungodly hour, you'll have little trouble seeing dazzling Venus, easily the brightest object in the dawn sky.

Below and to its left, you may notice Mercury appearing as a fainter, yellowish "star." If you spot it, you should consider yourself lucky; it's been said that the great 16th-century Polish astronomer Nicolaus Copernicus – who calculated the movements of the planets – had never actually seen this world with his own eyes.

Don't be surprised if Mercury appears to twinkle; the thick column of air through which its light must pass will do that even to a planet, despite what we might have learned in school.

If you have a small telescope, aim it toward each of these distant worlds. The moon, of course, will be strikingly beautiful; the planets, however, will show little more than you can see with the unaided eye. That's because Venus is shrouded by clouds, and Mercury's light passes through so much swirling air near our horizon that its details are nearly impossible to discern.

Before you pack up your telescope, however, try a slightly higher magnification eyepiece. You may notice that Venus isn't perfectly round; it appears this week in a "gibbous" phase, much like our moon does just before or after it's full. This will change, of course, as Venus orbits the sun later this fall and winter.

Aim now toward Mercury, but don't be surprised at how tiny it remains and how blurry it becomes. First off, this planet is barely the size of the continental United States. And secondly, the extra power magnifies not only the planet but also the air turbulence and heat currents rising from our terrestrial landscape.

If you're fortunate enough to see a relatively steady image, you might notice that Mercury now displays a nearly "quarter" phase, but you'll need a pretty stable atmosphere and a higher-powered eyepiece for this.

Keep watch on Mercury for the next few mornings because its relatively rapid orbit around the sun will cause its appearance to change to a nearly "full" phase before it disappears once again from our sky.

The waning crescent moon will appear to pass just above Venus on Nov. 12 and above Mercury on Nov. 13.