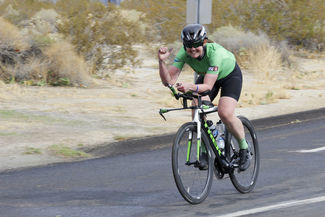 With the weather conditions certainly not in her favor, it did not stop Jennifer Orr’s attempt at breaking the World Ultra Cycling Association (WUCA) 24-hour Solo Female World Record of 439.65 miles.

In the blistering conditions in Borrego Springs, Orr failed in her quest to break the record, riding approximately 412 miles.

WUCA Head Official Mark Wevidhask said, “There were wind gusts registering 47.5 mph and with the driving rain Saturday afternoon, it became a nightmare for Jennifer.”

With Race Across America (RAAM) canceled due to the COVID-19 pandemic, Orr began prepping for the 24 Hour World Time Trials. Unfortunately, that was later canceled, so she set her sights on breaking the WUCA Solo Female 24-Hour World Record.

The previous record was set by Nancy Raposo almost three decades ago on September 22, 1992.

Orr began the 10-mile on-road loop, originally 18-miles in Borrego at 9 a.m. on Nov. 7, and it seemed the wind conditions picked up too. The forecast consisted of light showers and high-pressured winds, a cool and chilly day in the valley. But that did not stop Orr from smiling and brushing through it.

“I definitely was well aware that the weather forecast was changing over the several days prior to the attempt and not working in my favor. I did mentally prepare myself for the fact that it might not be possible for me to break the record in those conditions,” Orr said. “My coach and I had put a race plan together based on my effort rather than speed, which is necessary for a 24 hour event. I knew that I would need to stick to that plan and not waste too much energy fighting the wind in order to stay on the bike and maintain that effort for 24 hours.”

“When it’s a race with other competitors, you figure everyone else has to deal with the same conditions and it balances out. Unfortunately in this case, my “competition” was a 30 year old record,” Orr said.

Her route started by pedaling down Borrego Springs Road to Henderson Canyon down to Palm Canyon Road back to Christmas Circle, and many who passed her could not help but cheer her on in her efforts.

Despite not breaking the record she hoped to accomplish, she did set half a dozen world records pending WUCA certification.

In 2017, Orr entered her first 24-hour time trial as a solo rider, where she clocked 392.8 miles. The following year, she won the 24-Hour World Time Trial Championships and set a new female course record of 456 miles.

In 2019, she won the overall female and men’s division of the 928-mile, Race Across the West from Oceanside to Durango, Colorado.

“My attention will now turn to preparing to race solo RAAM in 2021 (assuming that it isn’t canceled again). Because I’ve put in such a high volume of training for the last several months, I will spend a few weeks recovering. I need to spend some of the downtime planning, putting together a support crew, fundraising, and looking for sponsors,” Orr said. “By the end of the year, my training will probably start to ramp back up again to prepare for RAAM. We are also talking about coming back to Borrego Springs in early 2021 for another world record attempt, this time to set the WUCA records for 500 miles and 1,000 km. Neither distance has an established record in the solo female division.”