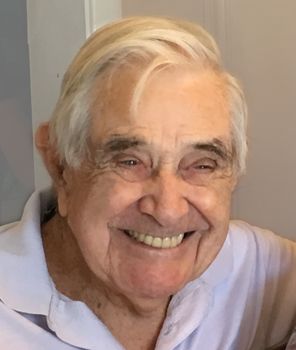 The family of Thomas Edwin Hall is sad to announce the passing of their beloved father, grandfather, great-grandfather, and brother on the 7th of October 2020.

Born November 15, 1925 in San Diego, California, Tom spent his early childhood getting into mischief in the marshes and tidelands of San Diego along with his younger brother, Donald (born 1928). Tom and Don's close connection as friends would last a lifetime, even after their lives took different paths with the start of World War II. Don joined the Navy, and Tom enlisted in the Marine Corps where he rose to the rank of Corporal and served as a Radioman in the Pacific Theater through the war's end.

In 1948, he met Martha Allison Wisdom and a romance blossomed. Tom married Martha the following year on September 4, 1949 in San Diego, California. Tom and Martha had two sons: Laurence Robert Hall, born 1951, and Vincent Patrick Hall, born 1953. The family moved around the Southwest of the U.S. for a few years before settling in Palm Springs in 1959. Their boys grew up in Palm Springs until their education, careers, and eventually their own families drew them to other locales in Southern California.

Tom worked for several years as an automobile mechanic but his special bond with his brother influenced a shift in his career to working as a heavy equipment mechanic. As young men, Tom and Don were fascinated by aviation and taught themselves to fly. After many years of flying and likely hundreds of hours of flight unlogged in small one or two seat airplanes, they both decided to get their pilot's license. The brothers were able to use their love of aviation to support their work by flying their small airplanes to remote job sites often landing on improvised airstrips, clear patches of ground or (if they were lucky) a nearby section of paved road. In 1963, Tom went to work at the DOE Nevada Test Site, a "temporary job" from which he retired more than two decades later. Over those years, Tom flew his Cessna 170A each Sunday to Mercury, Nevada and then flew back to Palm Springs the following Friday. He flew tens of thousands of hours over the desert finding his way by moonlight, dead reckoning, and the headlights of cars driving between Los Angeles and Las Vegas. Tom worked at the Test Site for the most active years of underground nuclear testing and worked his way up to a management role as foreman, overseeing all the mechanics at the facility.

At age 62, Tom retired from his work with heavy equipment with all 10 fingers almost entirely intact and focused full-time on his passion, airplanes. He went back to school and earned his A&P Certificate with Inspection Authorization, which allowed him to start his second career as an airplane mechanic and inspector. He would only work on the planes of pilots he liked and trusted to fly safely; passion motivated his work rather than growing a business. This change in career gave Tom and Martha the freedom to fly when and where they wanted with few restrictions. Where his early flying had grown to include occasional family trips throughout the southwest with sons in the back seat, now he and Martha had the freedom to explore at their leisure. He was the pilot and she was the navigator. They flew throughout North America, collecting genealogical information and documenting the Wisdom, Blankenship, Hall, and numerous other branches of the family tree. Martha's passion for genealogy took them on research trips to England and Ireland so she could fill in Tom's side of the family tree, the Hall and Cole branches.

Tom and Martha shared over 60 years of flying together and visited nearly every state and province in the United States and Canada, including two trips north of the Arctic Circle in their Cessna 170A. Their membership in The International Cessna 170 Association and the Dilapidated Pilots of Palm Springs gained them friendships all over the U.S. and Canada. They had many travel stories to share and a few harrowing events along the way, but never a landing that they couldn't walk away from, which is to say they were all good ones. They continued to fly together until their 90th birthdays when they decided to retire their wings, although Tom continued his aircraft annual inspection business, occasionally enlisting his son or grandson to fly him to work on a friend's airplane.

The family is holding an Irish wake at the air ranch in mid-November. Tom and Martha's ashes will be interred at Miramar National Cemetery. In lieu of flowers, please consider a contribution in Tom's memory to the Salvation Army, a charitable organization both Tom and Martha supported for many years.