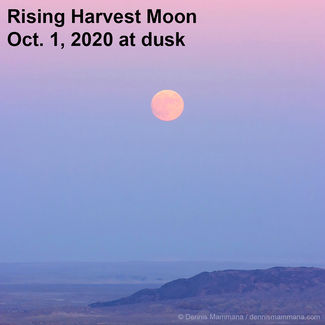 The harvest moon is the name given to the full moon that appears nearest the autumnal equinox.

If you're looking to score some points with your sweetie, here's a great idea.

Late on the afternoon of Sept. 30 or Oct. 1, pack a romantic picnic and a blanket, and head toward a hilltop with a nice, clear view of both the eastern and western horizons. Oh, and don't forget to take your sweetie with you.

After enjoying a gorgeous sunset in the west, turn around and face the opposite direction. There you'll witness an equally beautiful sight: the rising of the famous harvest moon.

What makes the harvest moon so special? The harvest moon is the name given to the full moon that appears nearest the autumnal equinox (which, this year, occurs on Oct. 1) by farmers of ages past, whose corn, pumpkins, squash, beans and wild rice were traditionally ready for gathering. Many cultures celebrate this time with annual harvest festivals.

The harvest moon is more than just a quaint cultural legacy, however – or an opportunity for hopeless romantics to spoon (according to the lyrics of the early twentieth-century popular song). It actually offered some practical value to farmers for many years.

Around the time of the autumnal equinox, the moon's orbit around the Earth appears at a shallow angle against the eastern horizon. Each evening, when the moon has traveled a bit farther around our planet in its orbit, it rises only about 20 minutes later on successive evenings. So, for a week or so during this time, moonlight shines on farmers' fields during early evening hours. Before the days of outdoor lighting, farmers who had run out of daylight before completing the day's harvest welcomed this moonlight, however pale it might be.

Many myths surround the harvest moon. Some believe it appears larger and redder than normal, but this just isn't true. Much like the sun, the moon always appears redder when rising because its light must pass through a greater path of dusty atmosphere on its way to our eyes.

As for its apparent immensity, it actually appears no larger than at any other time we see the moon near the horizon; its seemingly huge size is caused by an optical trick known as the Moon Illusion.

Whatever we call it, the full moon is always impressive. Even the unaided eye or binoculars can reveal that the lunar surface is not uniformly bright but instead has a mottled appearance. We know the lighter areas of our moon as mountainous or heavily cratered highlands; the darker areas are roughly circular in shape and are large plains of solidified magma. Some early sky watchers believed these were lunar oceans and named them "mare" or "seas," a name they still carry today, even though we know the moon is a dry and barren world.

OK, enough of all this science and history stuff. Get out there later this week, and make some wonderful new memories under the silvery light of the harvest moon.