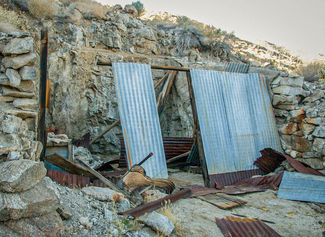 Tucked into a deeply sliced rocky canyon in the shadow of Whale Peak there are the remains of an old shack that long ago served as the honeymoon cabin for a pioneer cattleman and his new bride.

The Harper family began raising cattle in the Laguna Mountains in the late 1800's. In the winter the cattle were driven down to the desert where they could graze.

In 1918, one of the Harpers located a large, gently sloping valley north of Whale Peak that was ideal for grazing cattle. Cattle could easily be contained in this natural bowl. The area is still known today as Harper Flat.

Available water was a constant problem in the arid desert grazing lands, so the Harper boys began building small concrete dams on the upper arm of Pinion Wash.

The upper dam was built as a sand trap with the idea that overflow water would flow down and be contained behind the larger dam. Unfortunately, desert flash floods carried too much sand, and both structures soon became filled with sand and unusable.

In addition to the lack of water for the cattle, an outbreak of anthrax also killed much of their herd.

The dams are still visible today with one having a date of June 7, 1922 written in the concrete.

A few hundred yards below the dam are the remains of the old one-room cabin that was built in a side canyon against the solid granite walls. The roof, front wall and door were made of corrugated metal panels. An inscription on the door in pencil reads, "Please close the door and oblige, E.A. Harper, 7/1/28."

In the early 20's, one of the Harper sons, Eli A. Harper, born in 1902, brought his bride to this remote cabin on their honeymoon. In addition to his interest in cattle, he dabbled in feldspar mining in Harper Flat.

I had the pleasure of meeting Mrs. Harper about 1970 when she was living in Escondido. She looked upon the challenges and the lack of any luxuries as an adventure.

The Harper footprint was a large one in those days. The family owned Rattlesnake Valley in the Laguna Mountain that was eventually sold to Charles Luckman and renamed Lucky 5 Ranch.

There was an attempt to rename the ranch Harper Flats before it sold, but the name was never officially accepted.

A few years ago, portions of that ranch were acquired by Anza-Borrego Desert State Park through the efforts of The Anza-Borrego Foundation.

Like the most important piece of a puzzle, the Lucky 5 park acquisition was the final piece needed to connect Anza-Borrego and Cuyamaca Rancho State Parks.

Visiting the old Harper Cabin site is a great hiking or off-road adventure.

Hikers can reach the cabin from several directions, but the best hiking route is from the north. Turn off of Highway 78 on Pinyon Wash road at callbox 78-80. This is a sandy desert road, requiring at least a high clearance vehicle.

Drive about five miles to the end of the road where it is blocked by boulders.

Begin hiking up Pinyon wash and in less than a mile you will emerge into the vast expanse of Harper Flat.

Keep an eye out for a chance encounter with a desert tortoise. In the late 1960's I backpacked several dozen tortoises into the area as part of a state park effort to establish a breeding population.

Hug the boulders on your right following the wash and at just beyond two miles you come to a fence put up to keep vehicles out of the area.

Continue up the wash that forks to the right and you will encounter a dry rock waterfall that you can scramble up on the left side.

The dams are located further along up the main wash past where you turned off to the cabin.

Hikers can also come in following the Pinyon Mountain road out of Earthquake Valley, but this is a far more challenging hike.

Off roaders can use that road to reach the entrance of the Pinyon wash at the south end of Harper Flat, but it is one of the most challenging off-road trails in the park.

To give you some idea, to navigate into the area via four-wheel drive, you must go through the "Squeeze," also known as Fat Man's Misery, and then descend "Heart Attack Hill," a dangerously steep and rocky slope into lower Pinyon wash.

At that point you are committed and must continue out through Fish Creek and Split Mountain.

You can also reach the canyon mouth to the cabin by driving up Fish Creek, but this a very long route and also requires advanced off-road skills to drop into Pinyon Wash.

An excellent book to have if you are planning to visit the area is the "Anza-Borrego Desert Region," which offers GPS locations and mile-by-mile routes descriptions to the many interesting places of the park.

The book is available at the Visitor Center or Anza-Borrego Foundation's Park Store at the Mall in Borrego Springs.