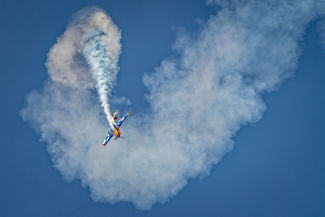 The sound, the sight, the thrills, the smell of aviation fuel, the spectacle. Akrofest 2020 was back again, with 33 pilots competing from near and far taking to the clear skies of Borrego Springs to showcase their talents in the International Aerobatic Club Chapter 36's annual Akrofest Competition, Oct. 8 to Oct. 10.

It was a great turnout for the event, considering the COVID-19 circumstances for the pilots. This is the premier event in their calendar.

The chapter touts their aerobatic box as "the world's finest aerobatic box – built to CIVA standards, designed to host the world championships, and practically visible from space," said IAC President Jim Bourke, who is also one of the top stunt pilots.

This yearly event is always a sight to see, and one that many look forward to enjoy. However, with the coronavirus pandemic, it has made things hard for the club. As much as they wanted spectators to enjoy the competition, following health and safety guidelines was their first priority. The state defined categories of what is acceptable to reopen and one of those was "outdoor recreation," which is what the contest fell under.

"The state allowed boating, jet skiing, paddle boarding, and other activities such as that to take place. The guidelines were straight forward and we knew what to do to meet them in order for us to hold the contest," Contest Director Bryan Jones said.

"There were no shared closed contacts, no indoor facility uses whatsoever, and everyone was so spread out in an outdoor setting. However, we still made sure if they were within six-feet of someone, they were wearing masks. Hand sanitizer and wipes were also available for use. We tried to make sure it was a safe, yet fun event during this time."

The other annual event hosted by IAC-36, the Hammerhead Roundup, usually held in April, was canceled due to the coronavirus.

Thirty-three pilots, nine of which were first-time competitors, competed in multiple categories of the not so typical air show, with precision flying of their very powerful yet agile aircraft, attempting to impress the judges, who were socially distanced across the runway at the Borrego Valley Airport, with Chief Judge Michael Church at the helm.

Some maneuvers proved difficult for pilots as they attempt to be as perfect as possible, trying to stay within the box to complete a set pattern, as glitches, no matter how tiny, whether it is a slightly too early turn or flying out of the box, can cost them points. Advanced pilots are able to fly at an altitude-minimum of 100 meters, along with nose-dive stunts.

One of the most anticipated categories was the four-minute freestyle. Bourke, who flies an Extra-300 plane once again painted the skies with smoke. (See photos at bottom right).

Moore, a well-known and respected pilot could not fly as birds had damaged his plane. He was very disappointed as Borrego is his favorite air field.

Also present at the contest was pilot Rob Holland, who is a record-breaking aerobatic champion from Nashua, New Hampshire, who has flown over 180 different types of aircrafts.

Despite not participating in this year's contest, he was on the ground coaching some of the pilots.

"Having him there was really motivating for these guys," Jones said.

They still plan on holding both events next year, with the Hammerhead Roundup in April of 2021.

"I believe COVID-19 will be in a different place and hope by then we have a vaccine so that we are able to put on a show with an outdoor dinner for the residents of Borrego Springs, and visitors alike," Jones said.

Chapter 36 is one of three IAC chapters operating in Southern California, founded in the 1970s. IAC is a non-profit organization, as are all its member chapters. They are also a division of EAA, an organization that promotes the sport of aerobatics, provides standards for measuring the quality of aerobatic flight, and is the central governing board for contest aerobatics. IAC also works with the FAA in matters regarding aerobatic flight and associated regulations.

While IAC operates at a national level, local chapters within the organization operate at a regional level.