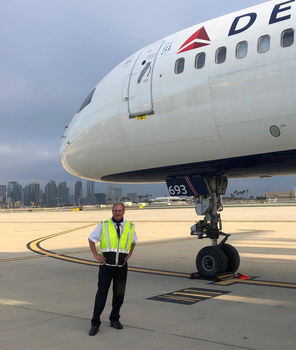 After 34 years, San Diego County District 5 Supervisor Jim Desmond has made his final call, hanging up his captain's hat as a Delta Airlines pilot. In mid-August, he completed his final Delta flight departing from Los Angeles landing in Boston.

Commercial airline pilots must retire when they turn 65, and despite being eight months shy of his 65th birthday, with COVID-19 hitting, it sped up the process, forcing him to retire early. Supervisor Desmond said it was "bit of an anti-climatic ending," but is grateful for his time with Delta.

Supervisor Desmond was able to do a quick interview with the Borrego Sun, in the midst of his busy schedule:

Sun: Why did you decide to become a pilot?

Desmond: It's a fantastic job. You get paid to see the world. I've had the opportunity to visit many different states and countries during my time as a pilot. My favorite place being Moscow, Russia.

Sun: What did you enjoy best about being a pilot?

Desmond: I enjoyed the freedom and the responsibility. I felt in my own bubble when I was in the cockpit, which allowed me to forget about what's going on in the world and just fly the plane. Also, being an engineer, I liked the technical aspects of flying.

Sun: What was one of your most memorable flights?

Desmond: My most memorable flight wasn't a flight as much as the time and place. On September 11, 2001, I was preparing to fly from Hawaii to Los Angeles, when the images started to appear from the World Trade Center. The next few days felt very surreal, not knowing when we were going to leave. The hotel I was staying at, became a hub for many other airlines while we all watched and waited.

Sun: What will you miss most about flying?

Desmond: The thing I'll miss most is being able to leave and go some place new. I've gotten to see so much of the world and I will miss all the places I've gotten to visit.

Sun: Now that you have hung up your captain's hat, what are some things you are looking forward to do with your free time?

Sun: What is something you can tell us that you are working on with the Board of Supervisors?

Desmond: I'm trying to get more businesses to reopen, but safely!

Jim Desmond was elected in 2018 over challenger Michelle Gomez to replace the term-limited Bill Horn, as Supervisor of District 5.

District 5 stretches from the beaches of Carlsbad and Oceanside, across North County's vibrant inland suburbs of Vista and San Marcos, through the agricultural region of Fallbrook, Bonsall, Valley Center and across the mountains to the desert community of Borrego Springs.