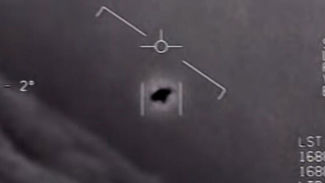 Photo Courtesy of the Department of Defense

An unidentified flying object captured by the US Navy in the "gimbal" video.

Three years ago, the Pentagon made statements that it had disbanded the covert program to investigate unidentified flying objects, this was not true.

It was renamed and hidden inside the Office of Naval Intelligence, where they continue to study

Pentagon officials will not discuss the program, which is not classified, but deals with classified matters. A Senate committee report said the program, the Unidentified Aerial Task Force, was to

"standardize collection and reporting" on sightings of unexplained aerial vehicles (i.e. UFO's) and was to report at least some of its findings to the public within 180 days after passage of the Intelligence Authorization Act.

It is hoped that in the future they will be more transparent with their findings. Recently in Southern California, there have been many unexplained sights of strange objects.