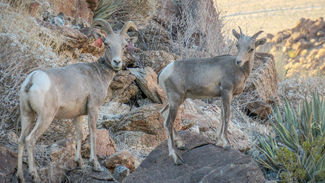 This is the reward for many sheep counters when they have a close encounter with sheep like this ewe and youngster in Upper Hellhole./See story on Page 4

You can call this year lots of things, but the 2020 Anza-Borrego Bighorn Sheep Count will be the COVID Count with an asterisk.

Lots of things were just not normal.

This was supposed to be the 50th anniversary event, but due to the Corona Virus Pandemic, this important annual citizen-science project had to be modified. Organizers hope that things will return to normal next year when the 50th annual count milestone can be appropriately recognized.

While a count during a normal year involves nearly 90 volunteers at 20 locations, this year there were only 26 volunteers at 13 sites. This makes an apples-to-apples data analysis difficult.

Michael Puzzo, a state park environmental scientist and count coordinator, said the goal this year was to reduce risk because of the Corona Virus, so count volunteers were limited to Borrego locals or a few veterans who limited their interaction with Borrego residents.

For the past half century, counters recorded sheep numbers, habitat conditions, heard health and population trends at the same locations and generally during the same conditions over a four-day period around the 4th of July weekend.

This can typically be a time when temperatures soar, but this year things were more bearable.

Daytimes highs reached 112ºF, but that was after the count ended on July 5. Evening temperatures for those who camped out were in the high 70's.

Puzzo said over the years, volunteers have accumulated thousands of hours of data that provides wildlife managers with critical information about these magnificent animals.

The abbreviated count this year makes it difficult to draw conclusions similar to past years.

"The sheep count is always a snapshot, but this year it was a very narrow view," Puzzo said. Volunteers recorded a total of 90 sheep, compared to a more normal count number of 273 logged last year, as an example.

"There are several factors for the lower numbers, including fewer locations counted, a cooler start to summer and the very wet spring we had," Puzzo said.

More than three inches of rain fell in Borrego in March and an additional one inch in April. Temperatures have also been relatively mild, and counters reported there is still plenty of quality vegetation available for sheep to feed on.

Additionally, some of the more remote locations that often record nearly 50 sheep, were not included in the census this year.

"The availability of good food and mild temperatures could mean sheep have not come to water yet," Puzzo said. As summer temperatures begin to sizzle, many remote watering holes dry up, forcing sheep to the few sources of available water.

The information recorded during the count will be combined with additional data collected by the California Department of Fish and Wildlife to provide a better view of bighorn sheep conditions.

Puzzo said even the limited count this year was good in the fact there were no "red lights" observed. Counters are always on the lookout for sheep that might be diseased or for indications that habitat conditions have been compromised for some reason.

"The sheep observed seemed to be generally in good condition and nothing was reported that was beyond normal," Puzzo said.

The highest number of sheep were observed at Agua Caliente in the southern part of the state park. The total there was 24 sheep, compared with 34 recorded last year.

Coyote Canyon was also a good location this year, with 20 sheep recorded at Lower Willows, 14 at Second Crossing and six in Cougar Canyon.

The third and fourth groves in Borrego Palm Canyon were not counted this year, but 11 sheep were spotted at the trail head, while there were no sheep seen at first or second grove.

The desert bighorn sheep is a protected species with a population estimated at 900 to 100 animals in a range that extends from Mexico to the San Jacinto Mountains in Riverside County. The population in Anza-Borrego is estimated to a few hundred.

Puzzo hopes that conditions will return to normal next year so the count can be again conducted with all sites covered as in past years.

Volunteers area are always welcome and are provided with training prior to the event that helps them identify age, sex and sheep health in addition to desert safety, dealing with extreme heat and wilderness dangers.

For additional information you can contact Puzzo at AB.sheepcount@parks.ca.gov.